Nanoparticles loaded with dye which release heat upon near-infrared irradiation could provide the key to more targeted treatment for blood clots, according to new research by the Baker Institute and Swinburne University.

Acute blockage of vessels by blood clots are the underlying cause of heart attacks and strokes and a leading cause of death and disability globally, with current drug treatments associated with major side effects including potentially fatal bleeding. 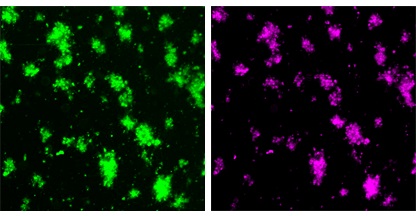 The green image shows the platelet/clot material. The purple image shows particles that have bound to the clot.

The mechanism for drug delivery was via clot-targeting liposomes, which are being investigated for their ability to deliver drug cargoes specifically to activated platelets, which cluster to form blood clots. In this paper in Advanced Functional Materials, A/Prof Xiaowei Wang and colleagues also incorporated near-infrared dye within the liposome, providing the potential for faster and more potent thrombolysis under infrared-red irradiation.

Merging the bioengineering expertise of Swinburne University researchers together with the biotechnology capabilities of Baker Institute scientists, they were able to create nanoparticles that will home themselves to blood clots. The targeting mechanism of drug cargoes meant that only a low dose is required, thereby their use will prevent potential bleeding complications.

They found this approach caused a significant reduction in the clot area compared to those areas treated with non-targeted liposomes, which may pave the way for a single dose treatment with fewer side effects.

They hope to build on these results to provide a viable new treatment approach to the current gold standard clot busting treatment involving plasminogen activators which come with limitations such as poor clot penetration, the need for long infusions and subsequent risk of fatal systemic bleeding.

Read the original article on Baker Heart and Diabetes Institute.