The study, published in the Dalton Transactions journal, explains how the scientists made two kinds of heterometallic (mixed metal) supramolecular capsules (or ‘cages’) using palladium and platinum.

hese materials were chosen for their altered stability in the blood stream and potential to control guest drug release by partially disassembling the capsule once in the targeted cells.

Experiments were performed by chemistry scientists at Flinders University, University of Otago, University of Auckland and Australian National University to see how various drug molecules would bind to the cavities or holes inside the special cages.

“We used this mixed metal combination as they have better stability than traditional molecules made only of palladium,” says Flinders University chemistry researcher Dr Lynn Lisboa, who recently joined the Flinders Chalker Lab from the University of Otago.

“Having control over where anti-cancer drugs are released within the body is greatly sought out and these cages have potential to act as vectors for targeted drug release. 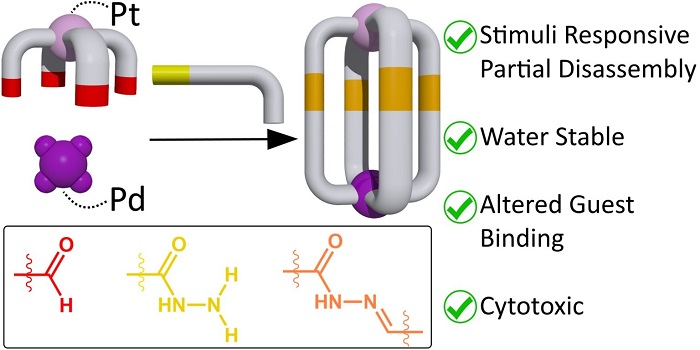 “One of the main issues with many cancer therapies is that they release drugs all over the body and are not specific to cancer cells, reducing their treatment efficiency and often causing debilitating side-effects such as nausea, loss of hair, and so on.

“Our research aims to tackle these issues and work on ways to put these capsules containing anti-cancer drug molecules into the body and have them release these drugs only in cancer cells.”

Further research into improving the biological compatibility of these cages and strengthening host-guest interactions are being investigated.