An X-ray Step Towards Superfast Nanoelectronics

When a material with magnetic properties, constructed from appropriately selected layers, is illuminated by a pulse from an X-ray laser, it instantly demagnetises. This phenomenon, so far poorly understood, could in the future be used in nanoelectronics, to build, for example, ultrafast magnetic switches. An important step toward this goal is a new simulation tool developed by a Polish-German-Italian team of scientists as part of a joint research project between the European XFEL and IFJ PAN.

No information-processing device can operate at a speed faster than that at which the physical phenomena underlying its operation occur. That is why physicists continue to seek phenomena that run on increasingly shorter spatial and temporal scales, yet can be controlled relatively easily. One promising research direction seems to be the demagnetisation process of ferromagnetic multilayer materials initiated by ultrafast X-ray laser pulses. A team of physicists from Poland, Germany and Italy, working at the European XFEL facility and at the DESY facility in Hamburg, could boast a significant achievement in this field: the prestigious scientific journal npj Computational Materials has presented the first tool that makes it possible to simulate the progress of X-ray-induced demagnetisation. Scientists from the Institute of Nuclear Physics of the Polish Academy of Sciences (IFJ PAN) in Cracow are an important part of the team. 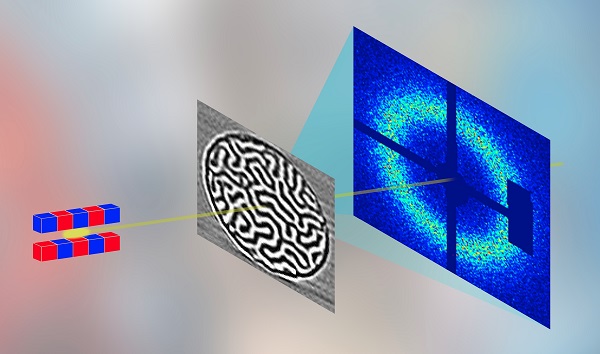 A pulse of light, emitted by electrons in the X-ray laser undulator, hits a sample of material with magnetic properties, scatters and forms a diffraction ring. The diameter of the ring depends on the average distance between the magnetic domains, and its intensity is the greater, the stronger the magnetization of the sample.

“In recent years, physicists have become quite familiar with demagnetisation processes initiated by visible or near-infrared light. However, when it comes to the impact of more energetic, X-ray radiation, we are all just taking the first steps. Our team's contribution lies in the construction of a theoretical model called XSPIN. With its help, it is possible for the first time to simulate demagnetisation in multilayered ferromagnetic materials exposed to femtosecond pulses of light from an X-ray laser”, says Prof. Beata Ziaja-Motyka (CFEL, DESY and IFJ PAN), who initiated the described research project together with Professors Alexander Lichtenstein (Hamburg University and European XFEL) and Sergey Molodtsov (European XFEL).

Rapid demagnetisation in multilayer materials was discovered in 1996 and has since attracted the attention of many scientific teams. In the absence of equipment that generates adequate X-ray light, research was mainly conducted using visible or infrared light. The situation changed dramatically when, in the past decade, physicists gained wider access to X-Ray free-electron lasers (XFELs). This is because these are devices capable of generating pulses of X rays of high intensity and duration counted in femtoseconds (i.e. quadrillionths of a second). Thanks to them, it was discovered a few years ago that X-ray-initiated demagnetisation in multilayer materials occurs significantly faster than under visible or infrared light. However, a coherent theoretical description capable of reliably simulating the demagnetisation progress was lacking.

“XSPIN is the development of an earlier simulation tool we have been constructing for more than a decade to predict phenomena related to the effects of laser pulses on materials. That model did not distinguish the orientation of the electron spin in the materials, and therefore did not describe their magnetic properties. The main challenge, therefore, was to skilfully extend the model to take into account the polarisation of electrons”, say Dr. Konrad J. Kapcia, Prof. at UAM (CFEL, DESY and UAM, Poznań) and Dr. Victor Tkachenko (IFJ PAN), first authors of the paper.

The correctness of the new tool was verified by comparing its predictions with data collected in one of the earlier experiments conducted with the mSAXS technique at the FERMI free-electron laser in Italy. At that time, the sample was a material composed of 16 alternating layers of cobalt and platinum, each one with a thickness of just one nanometre. The energy of the photons emitted by the FERMI laser was 60 electronvolts. When interacting with the material, the X-ray light scattered and formed a diffraction ring behind the sample. This ring is a source of valuable information – its diameter depends on the average distance between the magnetic domains in the material, and its intensity is greater, the stronger the magnetic properties of the sample.

“In the analysed experiment the diffraction ring behaved as predicted by our model. When the intensity of light illuminating the sample increased, its diameter remained constant, so the arrangement of magnetic domains in the material did not change. At the same time, the higher the intensity of the incident light, the weaker the ring was due to the demagnetisation taking place. In addition, the measured demagnetisation times were in the order of 100 femtoseconds, which also agreed with our simulations”, stresses Dr. Przemyslaw Piekarz, professor at IFJ PAN.

The agreement of the model's predictions with experimental results means that physicists, for the first time, have a tool to control X-ray-induced demagnetisation. Using XSPIN, it is now possible, for a specific multilayer material, to adjust the parameters of the laser pulses (their energy, duration and intensity) so that demagnetisation occurs on the spatial and/or temporal scale specified by the needs.

The XSPIN model will be further extended and confronted with the results of further experiments with multilayer materials, also containing ferromagnets other than cobalt and illuminated by photons with significantly higher energies. The closest opportunity for further verification will be the data from the LCLS laser at Stanford, USA, collected in an experiment with a sample made of 40 layers of cobalt and palladium, and demagnetised with photons with energies of 780 eV. A similar experiment at the European XFEL laser is also planned.

The simulations and measurements carried out so far lead scientists to be cautiously optimistic. There are growing indications that, in the future, X-ray-induced demagnetisation could indeed be used to build next-generation nanoelectronic devices. Initially, these could include, for example, ultrafast magnetic switches controlled by laser pulses. Another potential area of application seems to be dynamic computer memories. In this context, a key role is played by poorly understood processes related to the recovery times of demagnetised domains to their original state. An adequate in- -depth understanding and description of these processes will therefore require further theoretical and experimental studies.

Read the original article on Institute of Nuclear Physics PAN.