From a distance, they looked like clouds of dust. Yet, the swarm of microrobots in author Michael Crichton’s bestseller “Prey” was self-organized. It acted with rudimentary intelligence, learning, evolving and communicating with itself to grow more powerful.

A new model by a team of researchers led by Penn State and inspired by Crichton’s novel describes how biological or technical systems form complex structures equipped with signal-processing capabilities that allow the systems to respond to stimulus and perform functional tasks without external guidance. 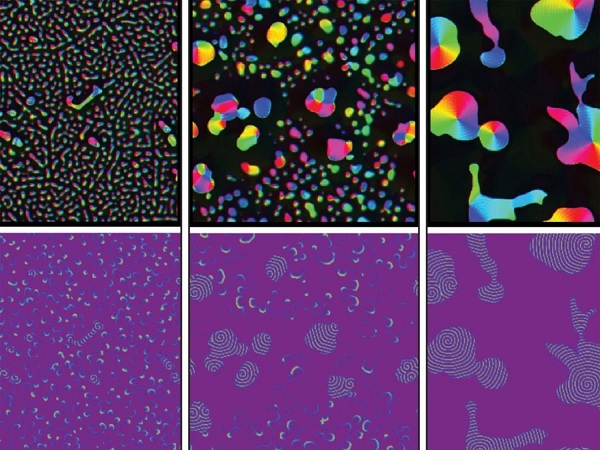 In this computer model, conceived by researchers from Penn State and Ludwig-Maximillian University, communications by small, self-propelled agents led to intelligent-like collective behavior. The simulation shows snapshots in time and displays droplet ripening, vortex-controlled aggregation and the merging of vortices.

Aronson and a team of physicists from the LMU University, Munich, have developed a new model to describe how biological or synthetic systems form complex structures equipped with minimal signal-processing capabilities that allow the systems to respond to stimulus and perform functional tasks without external guidance. The findings have implications in microrobotics and for any field involving functional, self-assembled materials formed by simple building blocks, Aronson said. For example, robotics engineers could create swarms of microrobots capable of performing complex tasks such as pollutant scavenging or threat detection.

“If we look to nature, we see that many living creatures rely on communication and teamwork because it enhances their chances of survival,” Aronson said.

The team built their model to mimic the behavior of social amoebae, single-cell organisms that can form complex structures by communicating through chemical signals. They studied one phenomenon in particular. When food becomes scarce, the amoebae emit a messenger chemical known as cyclic adenosine monophosphate (cAMP), which induces the amoebae to gather in one place and form a multicellular aggregate.

"The phenomenon is well known," co-author Erwin Frey of Ludwig-Maximilians-Universität München said in a release. "Before now, however, no research group has investigated how information processing, at a general level, affects the aggregation of systems of agents when individual agents – in our case, amoebae – are self-propelled."

For decades, scientists have been pursuing a better understanding of "active matter," the biological or synthetic systems which transform energy stored in the environment, e.g., a nutrient,  into mechanical motion and form larger structures by means of self-organization. Taken individually, the material has no intelligence or functionality, but collectively, the material is capable of responding to its environment with a kind of emergent intelligence, Aronson explained. It’s an ancient concept with futuristic applications.

Aristotle articulated the theory of emergence some 2,370 years ago in his treatise “Metaphysics.” His language is commonly paraphrased as “the whole is greater than the sum of the parts.” In the not-so-distance future, Aronson says research into emergent systems could lead to cell-sized nanobots that self-organize inside the body to combat viruses or swarms of autonomous microrobots that can coordinate in complex formation without a pilot.

There is currently a great demand for distributed artificial intelligence in the field of robotics, Aronson explained.

“If you’re designing a robot in the most cost-effective way possible, you don’t want to make it too complex,” he said. “We want to make small robots that are very simple, just a few transistors, that when working together have the same functionality as a complex machine, but without the expensive, complicated machinery. This discovery will open new avenues for applications of active matter in nanoscience and robotics.”

Aronson explained that from a practical standpoint, distributed artificial intelligence could be used in any kind of substance that has microscopically dispersed particles suspended within it. It could be deployed within the body to deliver a drug to fight disease or activate tiny electronic circuits in mass-manufactured microrobots.

“Despite its importance, the role of communication in the context of active matter remains largely unexplored,” the researchers wrote. “We identify the decision-making machinery of the individual active agents as the driving mechanism for the collectively controlled self-organization of the system.”