Molecular chirality means the geometrical property of molecules with broken mirror symmetry. Characterizing molecular chirality and understanding their roles in physiochemical situations has been important in broad research scope such as, biology, chemistry, and pharmaceutics. In general, molecular chirality can be analyzed using circular dichroism (CD) spectroscopy, which measures absorption difference of left- and right- circularly polarized light (LCP and RCP). However, the signal or change resulted from the interaction is too low because of the scale mismatch of light (a few hundred nanometers) and molecules (few nanometers). Although molecular CD can be amplified by localized surface plasmon resonance (LSPR), which confines electromagnetic field to the molecular scale, it is still difficult to detect molecular chirality at very low concentrations.

The research team of Seoul National University and Korea University used a new mode of CD in regularly assembled chiral plasmonic nanoparticles for ultra-sensitive (in-situ) quantification of molecular chirality. The novel chiral plasmonic nanoparticles (size of 180 nm), which have four-, three-, two-fold rotational symmetry without any mirror symmetry, are arranged with 400nm periodicity using a hexagonally patterned polymer template. At specific incident angle and wavelength of CPL, strong CD response additional to the CD response from LSPR of single nanoparticle can be generated. Although the additional plasmonic resonance to the LSPR of single nanoparticle has been previously demonstrated in achiral nanoparticle array, there is no CD response. Thus, coupling with chiral molecules cannot happen over the surface and only slight signal enhancement can be expected from the coupling with chiral molecules and LSPR. 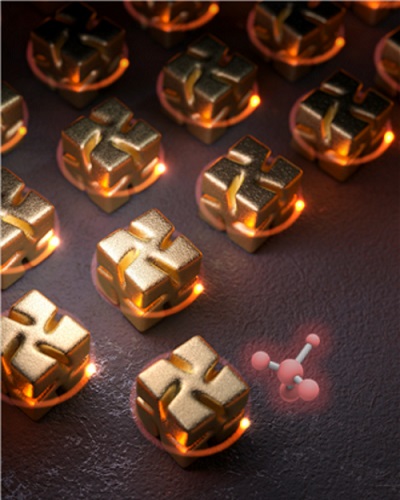 The research team found the physical origin of strong CD (i.e., collective CD) in the collective resonance and spinning of induced electric dipoles on each nanoparticle over the entire array. The CPL and periodic arrangement of nanoparticles induces wave of free electrons in each nanoparticle (i.e., effective electric dipole) which collectively interact each other along the surface. Here, the circular polarization of light ensures spinning of each dipole to the same direction. They also found collective spinning of dipoles generates uniform and chiral electromagnetic field throughout the entire array. As a result, the chiral interaction between molecules and this field is greatly improved to differently change the CD response depending on the molecular handedness (i.e., opposite spectral shift for left- and right-handed molecules).

The present study clarified how the chiral molecules influenced the CD response and achieved ultrasensitive in situ (limit of detection: 10-4 M) detection of molecular chirality. The integration of arrays in proof-of-concept devices, such as polarization-resolved colorimetric sensor and fluidic chip proved versatility of underlying principle presented in this study for the enantioselective monitoring of DNA/RNA hybridization and structural change in protein at extremely low concentrations. It shows the possibility of this sensing principle to be applied in investigating membrane protein, by integrating two-dimensional membranes on the array and monitoring chirality changes in their structures and folding.

Read the original article on Eurekalert.