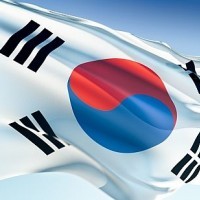 South Korea is an East Asian territory that is bordered by China to the Northwest and Russia to the Northeast. It has a market economy which ranks 15th in the world by nominal GDP and 12th by purchasing power parity (PPP), turning it into a G-20 major economy. It is a high-income developed country with a developed market and is a member of OECD. South Korea is one of the Asian Tigers, and is the only developed country so far to have been included in the group of the Next Eleven countries. It had one of the world's fastest growing economies from the early 1960s to the late 1990s, and South Korea is still one of the fastest-growing developed countries in the 2000s, along with Hong Kong, Singapore, and Taiwan, the other three members of the Asian Tigers. Having almost no natural resources and always suffering from overpopulation in its small territory, which deterred continued population growth and the formation of a large internal consumer market, South Korea adapted an export-oriented economic strategy to fuel its economy, and in 2010, it was the seventh largest exporter and tenth largest importer in the world. Bank of Korea and Korea Development Institute periodically release major economic indicators and economic trends of South Korea.[1]

Table 1 gives results of the 1st and 2ndphases on Korea nanotechnology initiative program (2001-2005). The table shows the results for 2007 and two years after the 2nd phase’s implementation. Korea nanotechnology investments in 2005 were 277.2 billion won in 2005 which is roughly 1.6 times more than that of 2001. At the same time, growth rate of nano-projects was 3.8% so that it increased from 1,015 to 3900. Number of nano-companies reached to 214 with 1.7 growth rate. Maximum growth rate belonged to “number of departments” where it raised from 3 to 37; it means the indicator grew 11 times in 4 years. Korean scientists published 407 nano-articles in 2001 so Korea’s rank was 8 in the indicator. The number of nano-articles reached 1,431 in 2005and Korea ranked 5th in nano-publication generation in the world. However 5.9% of the nano-articles were international collaboration. Two years after the 2nd phase’s implementation, the rate of investigations increased 2.7 times and reached 281 billion won.Number of nano-companies had grown 3.5 times and reached to 274.The number of nano-departments also reached to 56.

Table1: Results of the 1st and 2nd phases of Korea nanotechnology initiative program [2]

M.C.Roco et. All [3] compared governmental funding of the 1st phase in Korea with that of the US, Japan and EU between 2001 and 2005. Figure 2 shows the results. 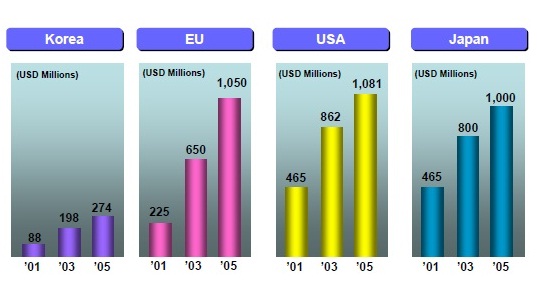 Figure2: Comparing the governmental funding in Korea with the US, Japan and EU

Governmental nano-investments in Korea are significantly less than that of US, Japan and EU. The main goal of Korea Nanotechnology Initiative is to stand amongst the top 3 countries in nanotechnology by the end of 2015. The following research centers help Korea in this way: 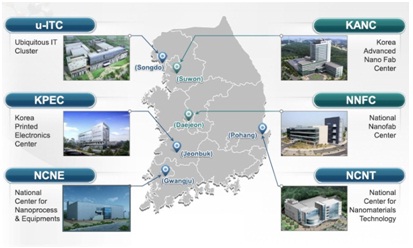 Three major organizations are active in securing national competitive edge by facilitating the creation of new industries and industrialization through the development of the fundamental technology in the area of nanotechnology and gradual/systematical construction of the cooperation system among academy, research institute and government. Table 2 introduces the organizations.

In 2011,Nano Safety Management Master Plan was introduced by Korea Nanotechnology Initiative and launched since 2012. The plan will finish in 2016. The overall objective of this plan is to define methods/processes for the identification and management/minimization of the inherent safety risks associated with nanoproducts. In fact, the plan considers safety aspects in product commercialization.

Korea Nanotechnology Development Plan aims to improve Korea's global situation in the field of nanotechnology to generate wealth and improve the quality of life in the country. Evaluation results of the executive activities show the first and second phases had good effects on Korean industries and products. But there is a long way to reach the set target and desirable situation. Figure 4: Nanotechnology dedicated budget in Korea between 2001 and 2013

Figure 5 represents number of nano-articles published by Korea between 2000 and 2012. There is continuous growth in the last 12 years. In 2000, Korea, with 513 nano-articles, stood 9thin the world in the field of nanotechnology. Korea reached 8th and 6th in 2003 and 2004 respectively. In 2008, Korea improved its position in world ranking so that it reached 5th with 4,213 nano-articles.However Korea kept the rank for 3 years, in 2012 it published 6,880 nano-articles and stood 4th in the world. Figure 5: Number of nano-articles published by Korea between 2000 and 2012

Citation indicators are used extensively to evaluate the impact of the research of individual scientists, institutes and university departments, and sometimes even countries. The outcomes of such analyses can have a profound influence on the careers of scientists or, for example, the future funding of research institutes. Number of citations and h-index are two frequently-used parameters to evaluate the quality and quantity of nano-articles.

Figure 6 represents Korea's rank in "number of citations per nano-article" between 2001 and 2012. 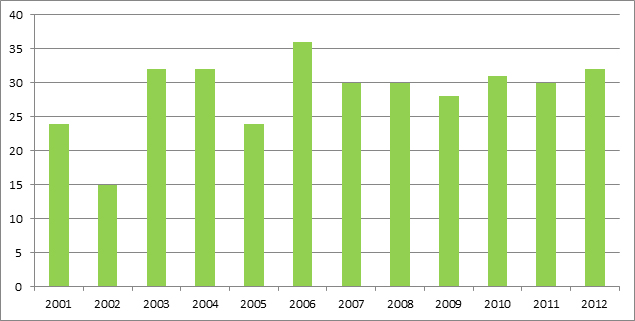 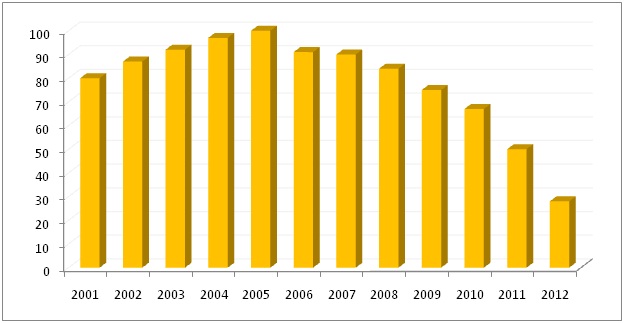 The H-index,a small number with a big impact, is a relatively simple way to calculate and measure the impact of a scientist. The h-index is the numbers of items which is in the h rank of the mentioned ranking and have at least "h" citations. For example, an h-index of 20 means there are 20 items that have 20 citations or more. This metric is useful because it discounts the disproportionate weight of highly cited papers or papers that have not yet been cited. The H-index can only increase if someone keeps publishing papers and they are cited. But the higher H-index you get, the harder it is to increase it.

Figure 7 shows H-index of nano-articles published by Korea. However there is a steady increase between 2001 and 2005, H-index decreases after 2006. Figure 8 represents rank of Korea in the world in H-index between 2001 and 2012. Korea stood 7th and 6th before 2007, but after 2008 it reached 5th in the world in H-index. It is seen that H-index of Korea nano-articles had a highly positive trend during the last four years.It proves that Korea is improving itself both in quantity and quality since h-index reflects peer review, and peer review reflects research quality.

Number of patents (published or granted) used frequently as a tool to assess a technology. Figure 9 gives the number of nanotechnology patents published (but not yet granted) in USPTO. There is steadily growth in the indicator over the period 2009-2013. Based on Statnano [5],share of Korea nanotechnology patent publications in USPTO increased from 2009 (372 patents) to 2013 (562 patents).

Figure 9: Number of nano-patents published (but not yet granted) in USPTO

Figure 10 shows distribution of nanotechnology companies by field in 2007. 44% of companies are active in material science and 16% in process/Metrology. There is no enough information about the companies. Nanowerk [6]maintains a number of unique and extensive databases for nano-related companies. There are only 25 nano-companies for Korea in the database.

Quite useful for research in legal thesis in NUSRL, Ranchi, Jharkhand, India. Kindly update this data immediately. Thanks a lot.