Which Nanomaterials Have Been Studied More? 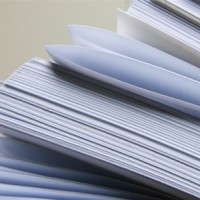 The term 'nanomaterial' entered the scientific literature of all world states after the appearance of nanotechnology. The concept of nanomaterials was created in the world of science and technology after the invention of scanning tunneling microscope (STM) in 1981 and the discovery of fullerene in 1985 [1].

For instance, to which category do nanocomposites belong? Therefore, another group of nanomaterials has been defined in this standard entitled nanostructured materials. Although none of the dimensions of nanostructured materials are nanometric at normal conditions, either one of the components in their structure is a nano-object or they have nanometric structure from microscopic or morphological points of view. Nanocrystalline materials and nanostructured coatings are other instances of the objects in this group [2]. It is mandatory to evaluate the role and importance of each of the nanomaterials in the development of nanoscience and nanotechnology because the type of nanomaterials used in the products determines the properties and characteristics of the final product. Therefore, efforts have been made in this report to study the trend of changes in the use of these nanomaterials during the past years by referring to the number of published articles on each of the nanomaterials.

In addition, some of nanoparticles synthesis methods are very simple such as grinding of bulk materials, milling, and chemical reduction [4-5], and it helps the production of nanoparticles. Therefore, the use of nanoparticles is the simplest and first step for many researchers to enter the world of nanotechnology. 'Nanoparticles' is a general word, and it sometimes refers to various nanomaterials such as nanocrystallines, nanorods and nanospheres. This fact is a reason for significant increase in the use of the word nanoparticles in articles. 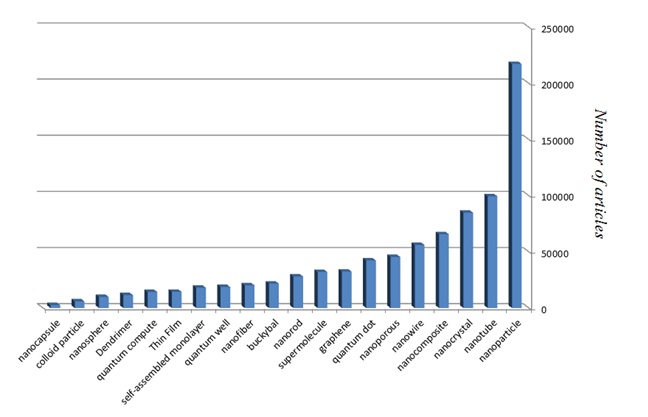 The trend implies to the fact that although some of the production methods for nanoparticles are simple and these nanomaterials have more application among other nanomaterials, the effectiveness of nanoparticles in various sciences has been proved to researchers, and it is one of the reasons why researchers are interested in nanoparticles. The increasing pattern in other nanomaterials is similar to this chart. However, there is a different pattern for graphene. This material entered the field of nanoscience and nanotechnology in 2004, and its discoverers were awarded with Noble Prize in physics in 2010. 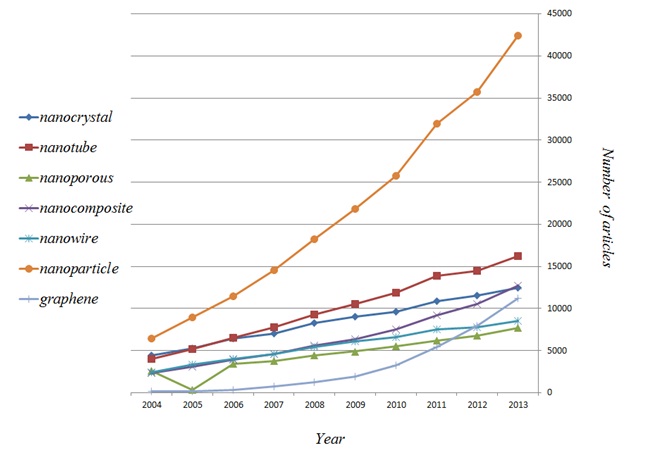 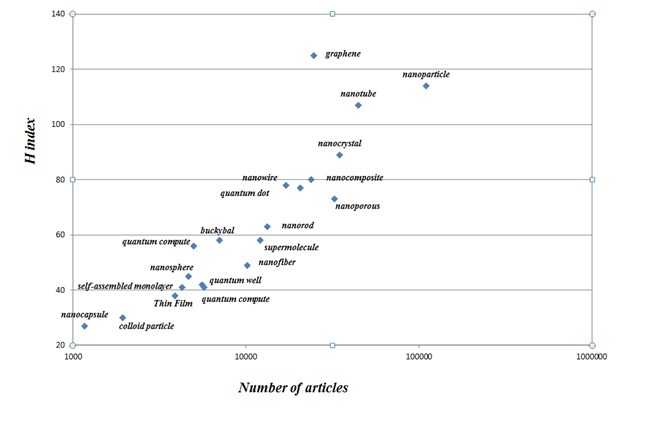