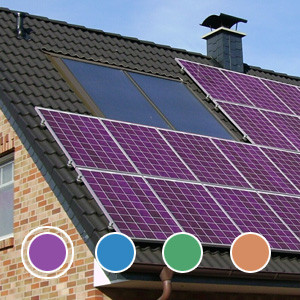 Jiangsu Runner PV Technology has produced self-cleaning solar cells that are 50% lighter than the current technologies and their energy waste is four times lower. The product, known as RN195M, is very strong and resistant against impacts. Compared with solar cells in which glass has been used, this product is much stronger and it is fireproof too.

In addition to 195M model, the company has produced another model with 220p and 245P capacities. On the products list of the company, solar cells with various powers from 195W to 400W can be seen.

At present, many companies produce solar cells in China. According to the Nanotechnology Products Database (NPD), 246 nanoproducts have been recorded in the solar cells section of the bank, and China ranks first with 57 products.

Analysis of the Chinese companies that produce nanoproducts for solar cells shows that Risun Technology Company has the highest diversity with 11 products.

According to the data from Nanotechnology Products Databank, United States has the second rank after China with 49 products that are related to solar cells until the end of January 2017. Germany with 43 products, Italy with 21 products, and Switzerland with 12 products have the next ranks.