Nissan Company, in collaboration with several Japanese universities, has introduced a technology in which a mixture of water, alcohol, and graphene can be used instead of hydrofluorocarbons in refrigeration systems. Refrigerants could be more efficient and much more environmentally friendly thanks to this technology.

A research team of Tohoku University, Nissan Motor Co., Shinshu University, and Okayama University made a groundbreaking discovery in the quest to replace hydrofluorocarbons in refrigeration systems with natural refrigerants such as water and alcohol. Their study involved carrying-out a liquid-to-gas phase transition via a nanosponge, a soft, elastic material equipped with small nanopores less than 10 nanometers. Their findings could lead to more efficient refrigerants with a smaller carbon footprint.

The team of researchers successfully carried out a force-driven liquid-to-gas phase transition using a nanosponge. When a normal, wet sponge is squeezed, naturally, water is expected to come out. However, when using a nanosponge with a pore size of under 10 nanometers, a different phenomenon occurs. Even under low pressure, the sponge retains its liquid. 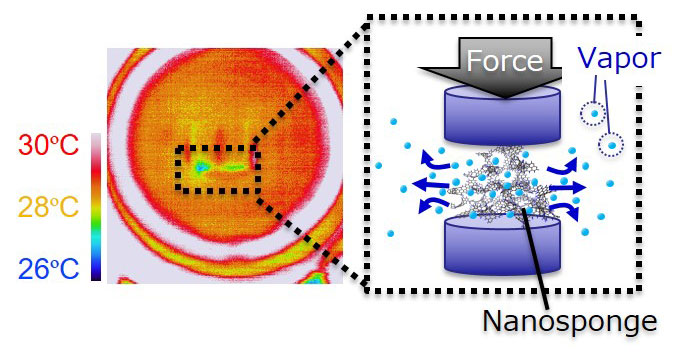 When applying force, however, the expelled liquid immediately evaporates into gas. Furthermore, as the sponge returns to its natural shape, it adsorbs the gas as a liquid into the nanopores again.

Until now, researchers have not carried out the squeezing process of nanoporous materials because conventional materials are too hard to be deformed. Nevertheless, the team circumvented this by creating their own soft, elastic, nanoporous materials, consisting of a single-layer of graphene walls. They measured their results using a home-made equipment designed to monitor liquid-gas phase transition when mechanical force is applied.

The team thought about the squeezing method after developing soft nanoporous materials. But even they could not anticipate their prediction becoming reality at the first attempt.

To date, there have been only two methods of converting trapped liquid into gas: i. heating or ii. decreasing the gas-phase pressure. The squeezing method provides a third way, generating a new theme in the field of physical chemistry and paving the path for more environmentally friendly refrigeration systems. Cool stuff!

Samsung Made a Solar-charging Eco Remote for Its Latest TVs