Researchers have synthesized nanoparticles that can be used for 3D printing by self-assembly and patterning‎. The application of these nanoparticles contributes to designing and manufacturing smart products such as windows, sensors, or flexible energy storage devices. These nanoparticles are in composite form and can be combined with different materials and additives. One of the advantages of this technology is ultra-narrow size distributions of the particles.

Scientists from the University of California, Santa Barbara and the University of Hawaiʻi at Mānoa have evaluated the potential applications of 3D printable nanocomposites materials. The study published in Science states, “At the intersection of the outwardly disparate fields of nanoparticle science and 3D printing lies the promise of revolutionary new ‘nanocomposite’ materials.”

“Emergent phenomena deriving from the nanoscale constituents pave the way for a new class of transformative materials with encoded functionality amplified by new couplings between electrical, optical, transport, and mechanical properties.”

Controlling nanocomposites
Nanocomposites are classed as hybrid materials consisting of a mixture of polymers. Such materials have exhibited enhanced thermoelectric, and optical, properties making them suitable for a range of electrical devices. Previous studies have shown potential for smart fabrics as well as multi-color additive manufacturing.

According to the UC Santa Barbara and UH Mānoa team, the remaining scientific challenges for nanocomposite materials lie within the ordering or control of nanoscale particles with prescribed shape. The limited pathways used to synthesize and pattern such materials over length scales are required for devices, thus hindering its development. The study states:

“The use of ordered nanocomposites in such applications has historically been hampered. At the same time, ‘top-down’ assembly approaches that exploit advances in 3D printing technology have established bridges from the macroscale down to the nanoscale; direct deposition of nanocomposites has been demonstrated and provides clear pathways for patterning and integration of functional nanocomposites.” 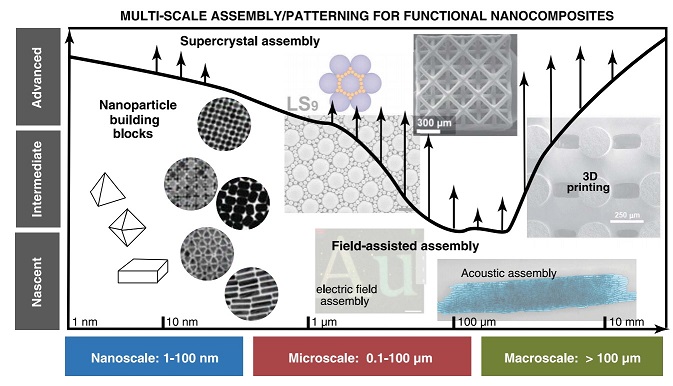 The convergence of nanoparticle synthesis, multiscale self-assembly, and 3D printing for functional nanocomposites. Well-established pathways to a wide diversity of nanocrystals and advances in assembly and patterning show opportunities for transformative devices and new techniques to pattern supercrystals at the device level. Image via UC Santa Barbara.

Smart devices using nanocomposites
The ability to pattern nanocomposites and integrate them with other materials through additive manufacturing is said to enable critical pathways to characterize the structure. In the researchers’ beliefs, “successful outcomes in materials design hinge on the nanoscale building block.” This state involves the targeted synthesis of colloidal nanocrystals (NCs) or crystalline nanoparticles.

According to the study, the control made through this synthesis has allowed for ultra narrow size distributions, as well as an extensive shape library beyond spheres, rods, and polyhedra to complex branched structures such as octapods.

As a result, devices such as nanorods can be produced which have tunable behavior for applications such as smart windows, where light transmission properties are altered when voltage, light or heat are applied. “Bridging functional nanocomposites to robust macroscale devices” is co-authored by Matthew R. Begley, Daniel S. Gianola, and Tyler R. Ray. 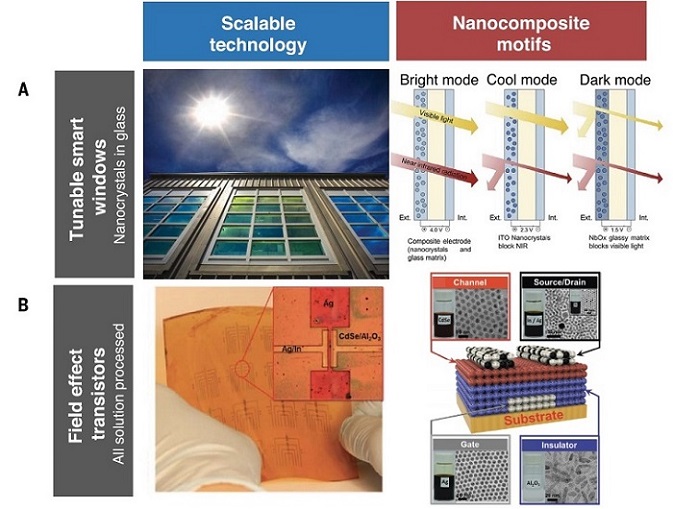