A magical display that projects holographic images that change when in contact with water has been developed. This new technology increases the possibility of commercialization as it can infinitely imprint holographic images.

A POSTECH research team led by Professor Junsuk Rho (Department of Mechanical Engineering and Department of Chemical Engineering) and Ph.D. candidates Byoungsu Ko, Younghwan Yang, Jaekyung Kim, and Dr. Trevon Badloe has developed a technology for a humidity-responsive display that changes in brightness and color depending on the degree of humidity.

The team additionally developed a display on which structural colors can be discretionally tuned. A blue image at low humidity turns red as humidity increases. If humidity is fine-tuned, all RGB colors may be expressed, in addition to the two colors. 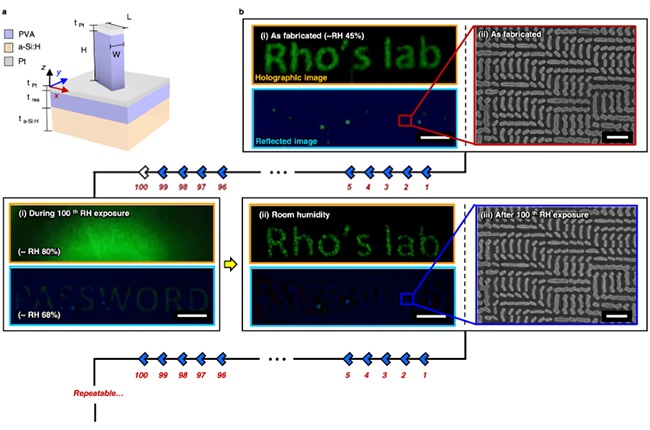 This study also draws attention to the team’s success in using the single-step nanoimprinting technique to print the images. It is notable that images can be vividly expressed even on a flexible substrate. In addition, as a single pixel of this display—which reaches 700 nm (1nm = 1/1 billion m)—is smaller than those of currently commercialized displays, it is anticipated to become the core technology for nanostructured displays. 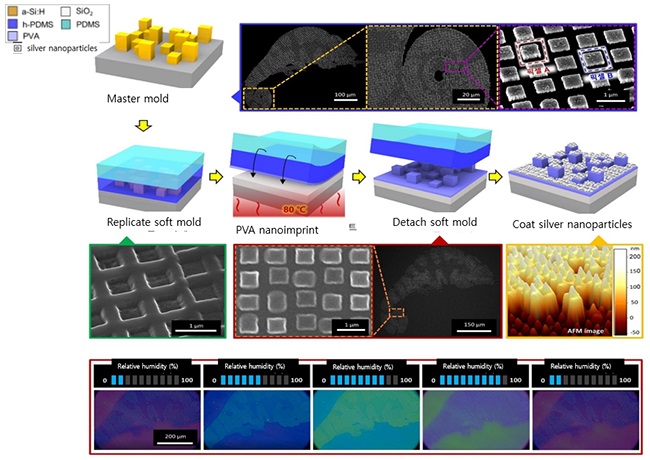 The findings from the study have received significant attention as the newly developed technology may be employed to security labels for authentication against counterfeits, including food items like whisky, currency bills, or passports. The team has been working with Korea Minting and Security Printing Corporation (KOMSCO) to apply the optics-based future security technology to actual products. Subsequently, this technology is expected to be applied to the development of a hydrogel macromolecule-based display that responds to external stimuli such as heat, acidity (pH), and fine-dust pollution.

These findings on the brightness and color tunability of holographic images were published in the international journals Nature Communications and Advanced Science, respectively.

This research was supported by the Samsung Science & Technology Foundation, the Pioneer Program of Future Technology of the National Research Foundation under the Ministry of Science and ICT and POSCO-POSTECH-RIST Convergence Research Center program funded by POSCO.


Read the original article on Pohang University of Science and Technology (POSTECH).