An Overview of Nanotechnology Patents Focusing on Coronaviruses

As reported by StatNano, 9,217 patents on coronaviruses have been filed at 24 different patent offices to date, 5.2 percent of which are in the field of nanotechnology, with the President and Fellows of Harvard College holding the largest number of those nanotechnology patents.

Coronaviruses are a large family of viruses that cause a range of illnesses from the common cold to more serious, lethal forms. Thus far, seven coronaviruses have been proved to cause human diseases, four of which are 229E, OC43, NL63, and HKU1, causing mild diseases, while the other three can be even fatal. The first is the Severe Acute Respiratory Syndrome coronavirus (SARS-CoV), which emerged in late 2002 and disappeared by 2004; the second is the Middle East respiratory syndrome coronavirus (MERS-CoV), which emerged in 2012 and still circulates among camels; and the third is SARS-CoV-2 which was first reported in December 2019 in China, and it is the cause of Coronavirus Disease 2019 (COVID-19) which is now leading the world toward a public health emergency.

StatNano’s statistical analysis on the data collected from the Orbit patent database by February 13, 2020, shows that 24 patent offices have issued a total of 9,217 patents regarding coronaviruses to date. The first-ever patent on this subject was filed in France in 1974 by the researchers of the University of Nebraska–Lincoln, who had developed a vaccine to prevent diarrhea in ​​newborn calves. Since that year, researchers have been continuously working on coronaviruses, and the number of patents they have published every year is illustrated in Figure 1. It is clear that during the years between 2001 and 2005 that the world was tackling SARS, the number of coronavirus patents indicated a sharp increase, followed by an almost steady trend over the next years. 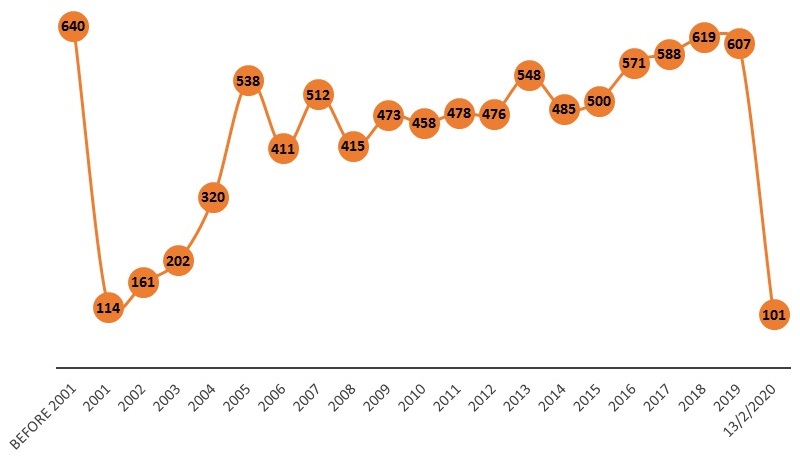 Figure 1. The number of patents on coronaviruses annually published since 1974. 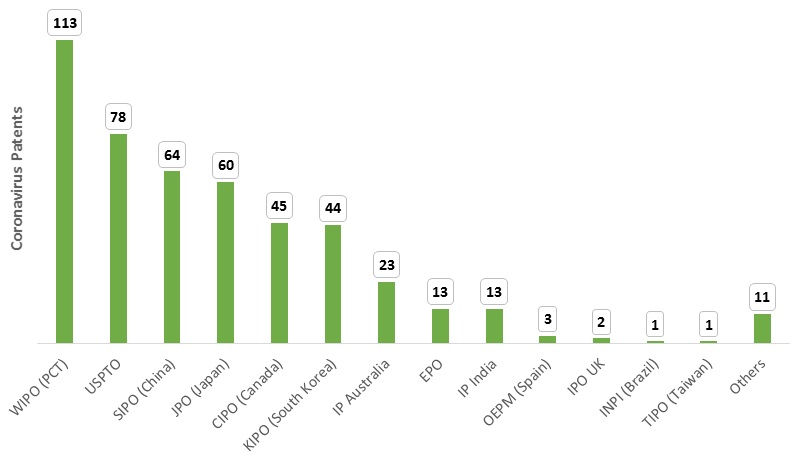 To look at the patents through a different lens, Figure 3 indicates the number of nanotechnology-based coronavirus patents published in every year before 2001 until February 13, 2020. Accordingly, there has been a considerable increase in the number those patents over the past three years – from 2017 to 2019; however, the number of the patents has always been going up so far. 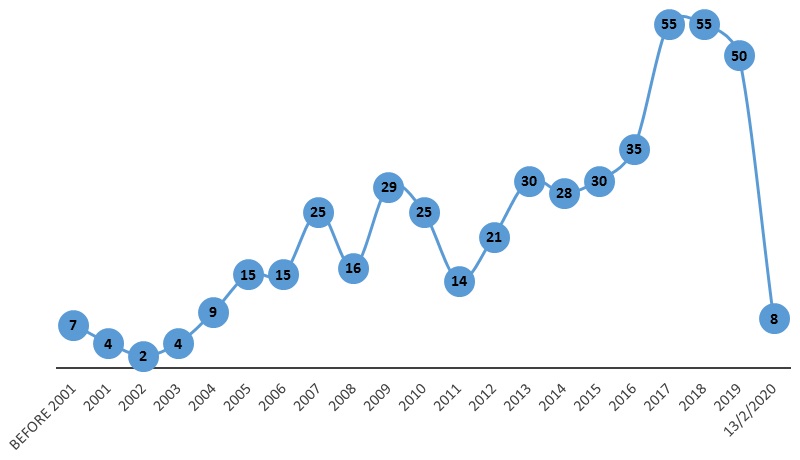 Reviewing the assignees of nanotechnology-based coronavirus patents shows that the President and Fellows of Harvard College tops the list with the greatest number of the patents. The second place is taken by Curevac AG – a leading biopharmaceutical company based in Tübingen, Germany, specializing in developing vaccines for preventing infectious diseases and medicines for treating cancer and rare diseases. The Regents of the University of California and Massachusetts Institute of Technology (MIT), respectively, hold the third and fourth spots, followed by the California Institute of Technology (CalTech) and Well Shield LLC, sharing the fifth rank on the list. The following table illustrates the top five patent assignees holding the largest number of nanotechnology-based coronavirus patents and their share in the total nanotechnology-based coronavirus patents.

Most of the nanotechnology patents on coronaviruses have focused on the diagnostics, vaccines, and treatment methods of the diseases caused by these viruses. A vast majority of diagnostic methods have been based on CRISPR technology; and at the treatment stage, messenger RNAs have been widely used, which had shown great promise in the treatment of other diseases such as AIDS. Messenger RNAs are a class of ribonucleic acids that code a genetic program for producing a specific protein (polypeptide). In fact, they are single-stranded RNAs corresponding to the genetic sequence of a specific gene and are read by the ribosome in the process of producing a protein.

The rest of the patents have been dedicated to the methods of preventing the viruses from spreading, which include nanoemulsion-based antimicrobial agents or nanomaterial-based filters for controlling exposure to the viruses. Some of the filters can completely block out the viruses, or more interestingly, have self-disinfecting properties.