Sonovia’s textiles are resistant to bacteria and fungus; firm hopes its tech will also work against viruses; has sent samples for testing to China

Sonovia Ltd., says it may have the ability to create virus resistance masks and textiles to help combat the coronavirus by using a nanotechnology process it developed to impregnate textiles with antifungal and antibacterial chemicals.

The firm says that using a patented nanotechnology process developed at Bar-Ilan University it has managed to create masks and protective textile equipment that have proven effective in blocking the penetration of bacteria and fungus. Now, Jason Migdal, in charge of business development at the firm, says he believes the same method could also be beneficial to halt viruses, and could be effective in helping halt the spread of the deadly coronavirus.

Migdal said the startup has sent textile samples impregnated with zinc using the same method to the Chinese Academy of Sciences in Beijing, for its lab to test the efficacy of the method against viruses.

Studies have shown that nanoparticles of zinc, silver and graphite are all viral inhibitors, Migdal told us in a phone interview, which is why the firm “has good reason to believe” that its process could also be useful in fighting viruses. The Chinese lab will follow a European protocol to test the fabric’s anti-viral activity, Migdal said.

The virus that started in China has infected at least 28,000 people globally, and more than 560 have died. The World Health Organization has declared the outbreak a global emergency and has warned governments to prepare for “domestic outbreak control” if the disease were to spread in their countries.

Sonovia has developed an ultrasonic fabric finishing technology for the mechanical impregnation of zinc oxite nanoparticles — which are known to be strong anti-microbial and anti-viral agents —  into textiles in a permanent manner. 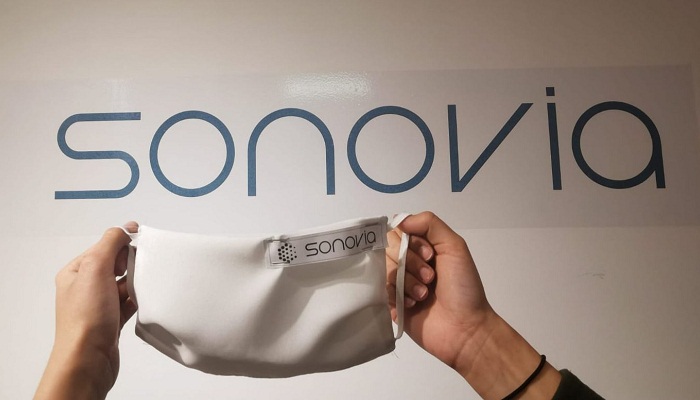 The process uses soundwaves in water that break down the zinc into nanoparticles that are formed within bubbles of air. When the bubbles explode, they create tiny jet streams of liquid that force the nanoparticles of zinc into the surface of the fabric, “for long-term durability,” Migdal said.

The impregnated textile is able to maintain its anti-pathogen activity at up to 100 washes at 75° Celsius and 65 washes at 92° Celsius, he said.

“We have demonstrated clear bactericidal activity against a broad spectrum of infections in laboratory tests,” he said. A pilot study at a European hospital showed that when the impregnated fabrics were used in protective clothing, there was a “significant reduction” of infections. “There was less bacteria in the ears and in the mouth,” he said.

Because the face masks were meant for repeated use, they “could be distributed effectively where they are needed most in China as well as being more sustainable to the environment and the local economy,” he said.

Sonovia’s technology recently got a 2.4 million euro grant from the European Commission under the Horizon 2020 program, Migdal said.

Read the original article on Times.