A New Understanding of Ionic Interactions with Graphene and Water

A research team led by Northwestern engineers and Argonne National Laboratory researchers have uncovered new findings into the role of ionic interaction within graphene and water. The insights could inform the design of new energy-efficient electrodes for batteries or provide the backbone ionic materials for neuromorphic computing applications.

Known for possessing extraordinary properties, from mechanical strength to electronic conductivity to wetting transparency, graphene plays an important role in many environmental and energy applications, such as water desalination, electrochemical energy storage, and energy harvesting. Water-mediated electrostatic interactions drive the chemical processes behind these technologies, making the ability to quantify the interactions between graphene, ions, and charged molecules vitally important in order to design more efficient and effective iterations.

Every time you have interactions with ions in matter, the medium is very important. Water plays a vital role in mediating interactions between ions, molecules, and interfaces, which lead to a variety of natural and technological processes,” said Monica Olvera de La Cruz, Lawyer Taylor Professor of Materials Science and Engineering, who led the research. “Yet, there is much we don’t understand about how water-mediated interactions are influenced by nanoconfinement at the nanoscale.”

Using computer model simulations at Northwestern Engineering and x-ray reflectivity experiments at Argonne, the research team investigated the interaction between two oppositely charged ions in different positions in water confined between two graphene surfaces. They found that the strength of the interaction was not equivalent when the ions’ positions were interchanged. This break of symmetry, which the researchers’ dubbed non-reciprocal interactions, is a phenomenon not previously predicted by electrostatic theory.

The researchers also found that the interaction between oppositely charged ions became repulsive when one ion was inserted into the graphene layers, and the other was absorbed at the interface. A paper describing the work, titled “Non-Reciprocal Interactions Induced by Water in Confinement,” was published November 17 in the journal Physical Review Research.

“From our work, one can conclude that the water structure alone near interfaces cannot determine the effective electrostatic interactions between ions,” said Felipe Jimenez-Angeles, senior research associate in Northwestern Engineering’s Center for Computation and Theory of Soft Materials and a lead author on the study. “The non-reciprocity we observed implies that ion-ion interactions at the interface do not obey the isotropic and translational symmetries of Coulomb's law and can be present in both polarizable and non-polarizable models. This non-symmetrical water polarization affects our understanding of ion-differentiation mechanisms such as ion selectivity and ion specificity.”

“These results reveal another layer to the complexity of how ions interact with interfaces,” said Paul Fenter, a senior scientist and group leader in the Chemical Sciences and Engineering Division at Argonne, who led the study’s x-ray measurements using Argonne’s Advanced Photon Source. “Significantly, these insights derive from simulations that are validated against experimental observations for the same system.”

These results could influence the future design of membranes for selective ion adsorption used in environmental technologies, like water purification processes, batteries and capacitors for electric energy storage, and the characterization of biomolecules, like proteins and DNA. 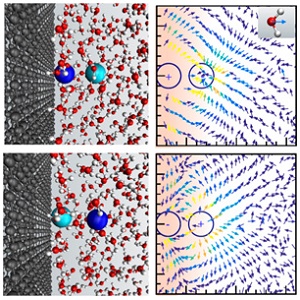 Illustration showing the interaction between ions at graphene-water interface.

Understanding ion interaction could also impact advances in neuromorphic computing — where computers function like human brains to perform complex tasks much more efficiently than current computers. Lithium ion can achieve plasticity, for example, by being inserted in or removing from graphene layers in neuromorphic devices.

“Graphene is an ideal material for devices that transmit signals via ionic transport in electrolytes for neuromorphic applications,” said Olvera de la Cruz. “Our study demonstrated that the interactions between intercalated ions in the graphene and physically adsorbed ions in the electrolyte is repulsive, affecting the mechanics of such devices.”

The study provides researchers with a fundamental understanding of the electrostatic interactions in aqueous media near interfaces that go beyond water’s relationship with graphene, which is crucial for studying other processes in the physical and sciences.

“Graphene is a regular surface, but these findings can help explain electrostatic interactions in more complex molecules, like proteins,” said Jimenez-Angeles. “We know that what’s inside the protein and the electrostatic charges outside of it matters. This work gives us a new opportunity to explore and look at these important interactions.”