While the first two Covid-19 vaccines relying on messenger RNA technology speed toward regulatory approval in the U.S., it’s worth remembering the vehicle that gets them where they need to go in the body.

Lipid nanoparticles are the fatty molecular envelopes that help strands of mRNA — the genetic messenger for making DNA code into proteins — evade the body’s biological gatekeepers and reach their target cell without being degraded. They are enabling some of the most advanced technologies being used in vaccines and drugs.

These carriers are used to package the active chemicals in drugs such as the chemotherapy Doxil or the cholesterol-lowering medicines Repatha and Praluent so they get to their targets with fewer unwanted side effects. And nanoparticles are being investigated to ferry the genome-editing CRISPR-Cas9 to target organs, in hopes of solving another delivery challenge. 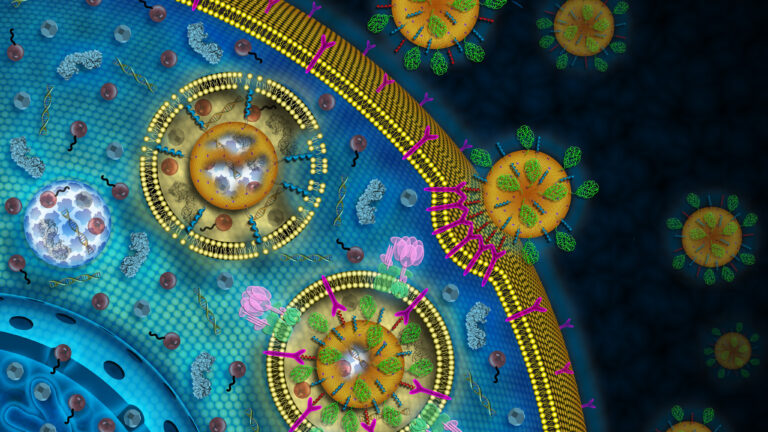 Lipid nanoparticles can deliver their contents directly to their targets.

In 2018, the biotech Alnylam turned Nobel Prize-winning RNA interference research into the first siRNA drug — Onpattro, for patients with an inherited neurological disorder — by packaging the small interfering RNA in lipid nanoparticles. Now, similar formulations are paving the way for messenger RNA vaccines.

“In my mind, one of the heroes in this story is the RNA nanoparticle,” said Daniel Anderson, professor of chemical engineering at the Massachusetts Institute of Technology, because “siRNA led to mRNA vaccines.”

The FDA’s approval of the first RNAi-based drug was “proof these nanoparticles were not just tools we use in the lab to manipulate genes,” Anderson said in a new STAT Report on nanomedicine, “but proof they can be translated into approved medicines.”

Nanomedicine is crucial to delivering mRNA vaccines, but it is also key in reformulating existing drugs and formulating new ones to treat Covid-19 patients, the new report explains. Before Covid-19 spread around the globe, mRNA vaccines were in the early stages of development in biotech companies, and nanotechnology was central to their efforts.

“After all, viruses are naturally occurring nanoparticles, and indeed, the nanotechnology community has long been trying to capitalize on the properties of viruses and mimic their behaviour, for example, for the design of virus-like nanoparticles for targeted drug delivery and gene editing,” an editorial in Nature Nanotechnology pointed out in August.

Once packaged in a vaccine, messenger RNA that encodes for a protein found on the surface of the novel coronavirus should compel the body’s cells to produce that protein, spurring an immune system reaction that will teach the body how to fight the virus and thus prevent Covid-19. It’s a different technique from the one used by traditional vaccines, which mimic disease components to trick the immune system into building defenses against future infections with the real thing. In contrast, mRNA vaccines jump-start cellular protein-making machinery to fight the invader.

A nanocarrier system made up of lipid or polymeric nanoparticles can bring mRNA into cells to instruct them to make antigens and stimulate the immune system to make antibodies against SARS-CoV-2. These lipids and polymers are designed to escape enzymes that might rapidly degrade the mRNA or limit how well cells take it up. Immune-stimulating boosters can also be added to provoke a stronger immune response.

Nanomaterials could also play a key role in getting vaccines to people in resource-poor or densely populated countries. Vaccines could one day be administered through microneedle patches, single-dose slow-release implants, film-based nanomaterials, or plant viral nanoparticles for antigen delivery, which do not require cold chains. That day seems far off in the race to find a coronavirus vaccine that works, but it remains to be seen whether SARS-CoV-2 will be more like the flu, requiring a new shot every year.

Nanoformulations could potentially be used to deliver stronger doses of intravenous or inhaled dexamethasone, one of the few existing drugs to show some efficacy in dampening the inflammation some Covid-19 patients suffer, directly to hyper-activated immune cells. Based on animal studies of other diseases — rheumatoid arthritis, inflammatory bowel disease, multiple sclerosis, liver fibrosis, and cancer — scientists believe sending the steroid encased in a liposome nanocarrier directly to macrophages, where nanoparticles are known to accumulate, would be more potent than giving “free” dexamethasone in order to control the cytokine storms that patients suffer when their immune response is too strong.

Read the original article on STAT.