Several strategies are being developed currently to combat the COVID-19 pandemic caused by the severe acute respiratory syndrome coronavirus 2 (SARS-CoV-2). Many vaccines for the disease are currently in development, with some showing very promising results. However, it remains unclear if vaccines will provide long-term immunity from the disease.

Another approach tested was using plasma from recovered patients, which has been shown to reduce viral loads and disease severity. But, the availability of donor plasma is a challenge. Another approach under development is monoclonal antibodies that have a high affinity for SARS-CoV-2 and can neutralize the virus.

Nanomaterials have been tested for virus detection, vaccine delivery, and viral capture before. However, the challenge is to capture the virus and inactivate it completely after binding to the host cell so that the chance of antibody-dependent enhancement in the disease is reduced. 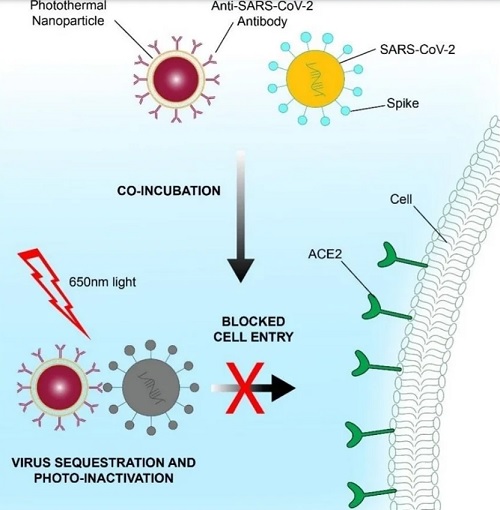 Researchers from the University of Chicago and Northwestern University, U. S. A., report nanoparticles with neutralizing antibodies on the surface to capture and inactivate SARS-CoV-2. They published their results in the bioRxiv* preprint server.

The photothermal nanoparticle has a semiconducting polymer core, which generates heat when excited with light. Photothermal nanoparticles can kill bacteria, viruses, and tumors efficiently without damaging nearby healthy tissues because of intense local heating. The core is encapsulated with an amphiphilic polymer.

The nanoparticles were about 90 nm in diameter and did not aggregate or precipitate when stored in the refrigerator for several weeks. The nanoparticles can absorb a broad light range in the visible and near-infrared between 500 nm and 850 nm. Fluorescence imaging confirmed the conjugation of the antibodies to the nanoparticle.

To test the local heating, the authors cast a drop of the nanoparticle solution on a glass coverslip. They placed a glass microelectrode close to the surface of the nanoparticles and hit them with light in 10 ms pulses. They found that each pulse increased the temperature by 0.7 ºC, corresponding to a heating rate of 70 ºC/s. This suggests that nanoparticles show a strong photothermal response that would kill the virus because of the intense heat.

The SARS-CoV-2 virus infects host cells by binding to the human angiotensin-converting enzyme 2 (ACE2). So, the authors next tested to see if the nanoparticles with neutralizing antibodies could inactivate the virus.

They used an alternate non-replicating virus, vesicular stomatitis virus, pseudotyped with the SARS-CoV-2 spike protein and green fluorescent protein. When the pseudovirus enters host cells, the fluorescence from the protein can be recorded, allowing monitoring of the viral entry into host cells.

Without the nanoparticles, HEK293T cells expressing ACE2 showed viral infection. When the nanoparticles were added and excited with 650-nm light for 10 minutes, there was inhibition of viral uptake by the cells, with complete inhibition seen at a concentration of 5 µg/mL.

The researchers also tested SARS-CoV-2 inactivation on a lentivirus pseudotyped with SARS-CoV-2 spike protein. Again, they found that the photothermal nanoparticles with the antibodies could neutralize the virus and prevent uptake by the cells.

Taken together, these data demonstrate the excellent inhibitory role of our antibody-photothermal nanoparticles in inactivating the SARS-CoV-2 pseudoviruses through the synergistic effect of the neutralizing antibody and photothermal treatment,”

In addition, no toxicity was observed in the HEK293T cells after nanoparticle addition, suggesting they are safe to use.

Thus, photothermal inactivation could be an effective approach to neutralize viruses and prevent antibody-dependent enhancement in diseases often seen when the virus is not completely inactivated. This approach could also be extended further to other pathogens and tumors to develop therapeutic approaches.