The research, involving URV researcher Vladimir Baulin, opens the door to the development of new bactericide materials as an alternative to antibiotics

Finding alternatives to antibiotics is one of the biggest challenges facing the research community. Bacteria are increasingly resistant to these drugs, and this resistance leads to the deaths of more than 25,000 around the world. Now, a multidisciplinary team of researchers from the Universitat Rovira i Virgili, the University of Grenoble (France), the University of Saarland (Germany) and RMIT University (Australia) have discovered that the mechanical deformation of bacteria is a toxic mechanism that can kill bacteria with gold nanoparticles.

The results of this research have been published in the journal Advanced Materials and are a breakthrough in researchers’ understanding the antibacterial effects of nanoparticles and their efforts to find new materials with bactericide properties.

Since the times of Ancient Egypt, gold has been used in a range of medical applications and, more recently, as for diagnosing and treating diseases such as cancer. This is due to the fact that gold is a chemically inert material, that is, it does not react or change when it comes into contact with an organism. Amongst the scientific community, nanoparticles are known for their ability to make tumours visible and for their applications in nanomedicine.

This new research shows that these chemically inert nanoparticles can kill bacteria thanks to a physical mechanism that deforms the cell wall. To demonstrate this, the researchers have synthesized in the laboratory gold nanoparticles in the shape of an almost perfect sphere and others in the shape of stars, all measuring 100 nanometres (8 times thinner than a hair).

The group analysed how these particle interact with living bacteria. “We find that the bacteria become deformed and deflate like a ball that is having the air let out before dying in the presence of these nanoparticles”, explained Vladimir Baulin, researcher at the Department of Chemical Engineering of the URV. The researchers state the bacteria seem to have died after a massive leak, “as if the cell wall had spontaneously exploded”. 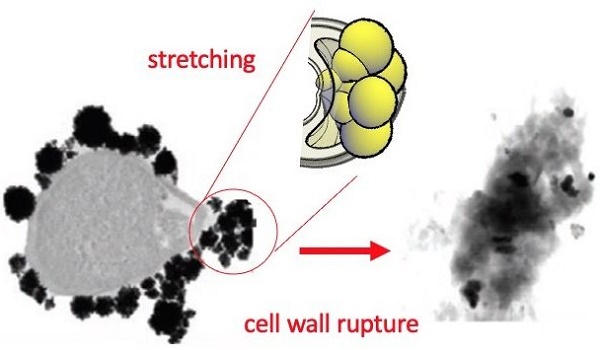 In the presence of nanoparticles, the cell wall of the bacteria ends up breaking seemingly by stretching, like a balloon that is inflated from different points until it exploted.

The scientists thought that a physical mechanism might be responsible for the death of the bacteria. Consequently, they carried out a numerical simulations to analyse how a homogenous layer of individual nanoparticles could apply sufficient mechanical tension to the cell wall of the bacteria that it ends up breaking seemingly by stretching, like a balloon that is inflated from different points until it exploded.

To confirm this hypothesis, the researchers created an artificial model of a bacterial cell membrane to evaluate its response when it entered into contact with the 100 nm gold nanoparticles. “We found that the model spontaneously contracted until it completely collapsed, thus proving the hypothesis that nanoparticles apply a mechanical stretch on the cell membrane of the bacteria”, Baulin asserted.

This discovery has been tested on both the bacterial model developed in the laboratory and on real bacteria and could be used on a broad range of nanoparticles. The research could lead to further developments of universal antibacterial materials based on physical principles.

Read the original article on Universitat Rovira i Virgili.