Scientists have developed a new material which could pave the way for cheap, pocket-sized breath testing kits capable of warning people they are at risk of developing diseases at the very early stages.

An international team involving Nottingham Trent University (NTU) and The Australian National University (ANU) has developed a 3D nanoparticle ‘scaffold’ which will be able to detect a very low concentration of dissolved molecules in the air.

The researchers say this is a big step forward towards measuring biomarkers – tiny molecules that play a role in disease – in gaseous environments such as breath.

The scaffold includes unique combinations of metallic and semiconductor nanoparticles, each thousands of times smaller than a human hair, which can be incorporated into ultra-tiny sensors.

These sensors could then be integrated into simple and small pocket-sized diagnostics, which, if a risk is detected, would give the user a warning and urge them to seek medical advice and further tests as soon as possible.

Today’s optical sensors use sensing materials that change their colour, when they are exposed to a high concentration of biomarkers trapped in a liquid medium, such as urine for pregnancy testing or blood for chronic diseases. 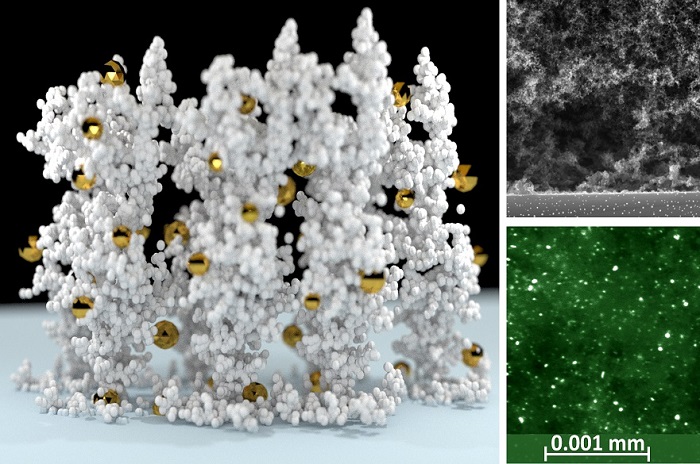 Previous research has shown that biomarkers indicating serious conditions such as diabetes and cancer, can also be found in the breath. However, their concentration is vastly reduced and sotoday’s optical sensors can not measure them.

It could also help to remove the need for invasive testing procedures, such as blood tests. It is anticipated that people with a family history of chronic illnesses may want to use the sensors, which could be customised to check for specific diseases.

“The good thing about breath is it’s full of biomarkers that could help us to detect chronic illnesses, but their concentration is so little in gaseous environments,” said Associate Professor Mohsen Rahmani, a Royal Society Wolfson Fellow in Nottingham Trent University’s engineering department.

He said: “The problem up to now has been the lack of a reliable detector. Our  new material, however, would be able to detect a low concentration of biomarkers freely moving within these environments.

“Our sensing material will not need batteries, wires or large and expensive lab equipment. This paves the road for the next generation of pocket-size sensors that could quickly and reliably diagnose disease at very early stages, simply by blowing on them.”

Professor Antonio Tricoli of the Australian National University and co-chair of ANU’s grand challenge programme Our Health in our Hands, added: “As well as the potential for developing breath sensing kits, these ultra-small materials could also be integrated into skin patches to track small concentrations of volatile biomarkers transpired from our skin. This may allow keeping track of our health in real-time.”

A study, demonstrating the development of the ultra-sensitive 3D nano scaffold, has been published in the journal Advanced Materials. The research, for which a working breath testing sensor prototype is under development, also involved Royal Melbourne Institute of Technology (RMIT) and Queensland University of Technology.