Nano-sized particles have been engineered in a new way to improve detection of tumors within the body and in biopsy tissue, a KTH research team reports. The advance could enable identifying early stage tumors with lower doses of radiation.

In order to enhance visual contrast of living tissues, state-of-the-art imaging relies on agents such as fluorescent dyes and biomolecules. Advances in nanoparticle research have expanded the array of promising contrast agents for more targeted diagnostics, and now a research team from KTH Royal Institute of Technology has raised the bar further yet. They are combining optical and X-ray fluorescence contrast agents into a single enhancer for both modes.

Muhammet Toprak, Professor of Materials Chemistry at KTH, says the synthesis of contrast agents introduces a new dimension in the field of X-ray bio-imaging. The research was reported in the American Chemical Society journal, ACS Nano. 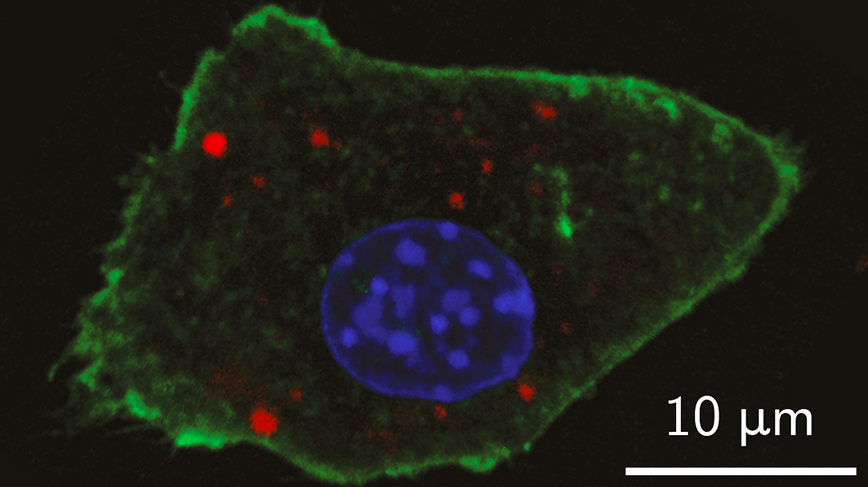 A lab image shows the detection of the newly-developed nanoparticle contrast agents inside a mouse cell with optical fluorescence (in red). The cell nucleus and plasma membrane are depicted in blue and green, respectively.

He says the new “core-shell nanoparticles” may have a role to play in the development of theranostics, a portmanteau for therapy and diagnostics, in which for example single drug-loaded particles could both detect and treat malignant tissues.

The core-shell contrast agent gets its name from its architecture: it consists of a core combination of nanoparticles with previously-established potential in X-ray fluorescence imaging, such as ruthenium and molybdenum (IV) oxide. This core is encased in a shell comprised of silica and Cy5.5, a near-infrared fluorescence-emitting dye for optical imaging techniques such as optical microscopy and spectroscopy.

Toprak says that encapsulating the Cy5.5 dye within the silica shell improves the agent’s brightness and extends its photo-stability—enabling the dual optical/X-Ray imaging approach. In addition, silica provides the benefit of tempering the toxic effects of the core nanoparticles.

Improving the odds of detection

Tests with laboratory mice have shown that the XFCT contrast agents enable location of early stage tumors of only a few millimetres in size.

Toprak says the technology opens the possibility to identify early stage tumors in living tissue. That’s because the presence of multiple contrast agents increases the odds that diseased areas will show up in scans, even as the distribution of the nanoparticles becomes obscured by their interaction with proteins or other biological molecules.

“Nanoparticles of different size, originating from the same material, don’t appear to be distributed in the blood in the same concentrations,” Toprak says. “That’s because when they come into contact with your body, they’re quickly wrapped in various biological molecules—which gives them a new identity.”

A multitude of contrast agents for XFCT would enable studying the biodistribution of nanoparticles in-vivo using low-dose X-rays, he says. That would allow identifying the best size and surface chemistry of the nanoparticles for the desired targeting and imaging of the diseased region.