Researchers have developed a ‘library of properties’ to help identify the environmental impact of nanomaterials faster and more cost effectively.

Whilst nanomaterials have benefited a wide range of industries and revolutionised everyday life, there are concerns over potential adverse effects - including toxic effects following accumulation in different organs and indirect effects from transport of co-pollutants.

The European Union H2020-funded NanoSolveIT project is developing a ground-breaking computer-based Integrated Approach to Testing and Assessment (IATA) for the environmental health and safety of nanomaterials.

Over the last two years, researchers from the University of Birmingham have worked with experts at NovaMechanics, in Nicosia, Cyprus to develop a decision support system in the form of both stand-alone open software and a Cloud platform. 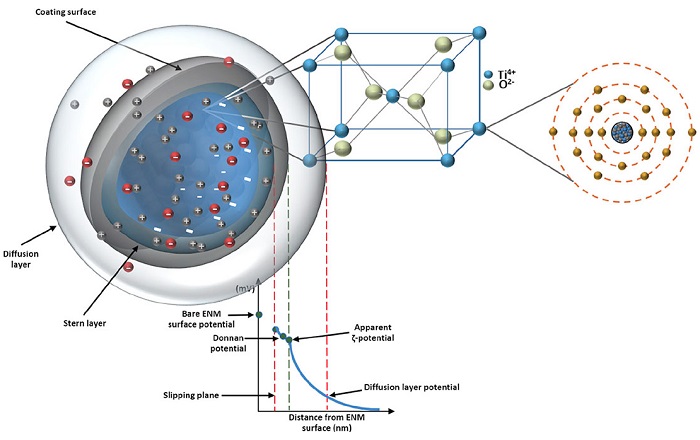 Scales of descriptors - from whole nanoparticle to unit cell to individual atoms.

The team has developed a freely available cloud library containing full physicochemical characterisation of 69 nanomaterials, plus calculated molecular descriptors to increase the value of the available information, details of which are published in NanoImpact.

Professor Iseult Lynch, from the University of Birmingham commented: “One of the limitations to widespread application of computer-based approaches is the lack of large well-organised high-quality datasets, or of data with adequate metadata that will allow dataset interoperability and their combination to create larger datasets.

“Making the library of calculated and experimental descriptors available to the community, along with the detailed description of how they were calculated is a key first step towards filling this datagap.”

Development of the cloud-based nanomaterials library is the fifth freely available web-based application that the project has delivered.

Antreas Afantitis, from NovaMechanics, commented: “Over the last two years, this project has already presented some very impressive results with more than 30 publications, making NanoSolveIT one of the most active projects in the nanomaterials safety and informatics space.”

Concerns about nanomaterials are also arising as risk assessment is lagging behind product development, mainly because current approaches to assessing exposure, hazard and risk are expensive and time-consuming, and frequently involve testing in animal models. The NanoSolveIT project aspires to address these challenges.

The latest development aims to enrich our knowledge of nanomaterials properties and the link from property to (cytotoxic) effect. The enriched dataset contains over 70 descriptors per nanomaterial.

The dataset was used to develop a computer-based workflow to predict nanomaterials’ effective surface charge (zeta-potential) based on a set of descriptors that can be used to help design and produce safer and more functional nanomaterials.

The resulting predictive read-across model has been made publicly and freely available as a webservice through the Horizon 2020 (H2020) NanoCommons project and via the H2020 NanoSolveIT Cloud Platform to ensure accessibility to the community and interested stakeholders.

In addition, the full data set, ready for further computational modeling, is available through the NanoPharos database, as the project consortium supports the FAIR data principles - committing to making its data Findable, Accessible, Interoperable and Re-usable.

Read the original article on University of Birmingham.