The research team succeeded in producing a nanofilm by using the electrostatic force to stack chitosan, which is a biological polymer, and hyaluronic acid in that order.

The research team succeeded in producing a nanofilm by using the electrostatic force to stack chitosan, which is a biological polymer, and hyaluronic acid in that order. To overcome the shortcomings of the existing nanofilm lamination method, which has low durability, the joint research team produced a stronger and more durable film with crosslinking technology through S.av. tyrosinase, an enzyme newly developed by the joint research team. The newly developed tyrosinase has a much faster cross-linking rate than conventional enzymes, and can be used in clinical practice. 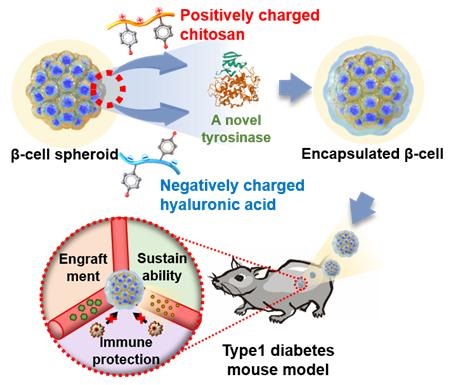 In the past, alginate was popularly investigated as transplantable materials for cell encapsulation to treat type 1 diabetes. However, the thick thickness of the capsule limits the blood glucose recognition and insulin secretion. In addition, alginate-based encapsulation system has a risk of fibrosis capsule formation. The “cell caging” technology developed by the research team is capable of immediate blood glucose recognition, blood glucose recognition and insulin secretion due to its ultra-thin thickness (roughly ~150 nanometers). The research team applied the caging technology to MIN6 cells, which are islet cells of mice, and transplanted them into the type 1 diabetes induced mouse, and succeeded in regulating blood glucose levels. In addition, the nanomembrane technology can be applied to both single cells and cell spheroids, and is expected to be applicable to heterologous organ transplantation and treatment of diseases using stem cells.

Professor Nathaniel S. Hwang noted, “Using the ‘cell cage’ technology developed in this study, it is expected that the immune rejection reaction, the biggest problem in the treatment of type 1 diabetes through beta-cell transplantation, will be overcome. The goal is to accelerate the commercialization of ‘cell cage’ technology through clinical development.”