As the second country in nanoscience publications, The United States possesses 368,504 WoS indexed nano-articles. It was also the second country in publishing highly cited nano-articles in 2020, with a value of 316 for the 5-year H-index. Having registered around 65,500 nanotechnology patents in both EPO and USPTO, it ranked first. According to the StatNano database, nearly 3,100 nanotechnology products from 714 companies are produced and marketed in this country. Given this country’s sixth significant national nano-policy documents as well as a cumulative budget of about $32 billion in this technology since 2001 to 2021, The United States is considered a leading country in the field of nanotechnology.

The United States was the first country to formulate a national program in nanotechnology in 2001. Ever since, it has adopted and implemented five further national nanotechnology policy documents and has received over $32 billion of investment from the government in this field.

By 2007, the United States had held the first place in the world with regard to the publication of nanotechnology-related scientific articles, but with the rapid, sustainable growth of China since 2008, it has ranked second regarding this indicator. In addition, it achieved the first ranking in the world in terms of the number of highly cited nano-articles published by 2018, but was second only to China in 2020, with 316 articles based on the 5-year H-index. The 5-year H-index is a measure of highly cited articles over a 5-year period.

In terms of nanotechnology patents, the USA still holds the first place in the world and has the highest number of nano patents in both the USPTO and EPO. So far, around 65,500 nano patents have been filed by American innovators and inventors in these two offices, although the USPTO possesses a significantly larger share.

The United States is one of the most influential countries in the ISO/TC 229 Technical Committee of the the International Organization for Standardization (ISO). In addition, most US national standards, such as ASTM, are highly regarded worldwide. The United States has 116 national standards in the field of nanotechnology, developed and published by various organizations including ASTM, NCL, NIST, NIOSH and IEST.

Although the precise number of nano-based companies and products in the United States is unknown, according to StatNano’s nano-product database (NPD), it can be concluded that the United States ranks first in the world in terms of commercialization and production of nanotechnology products. There are nearly 3,100 nano products from 714 US companies indexed in the NPD. 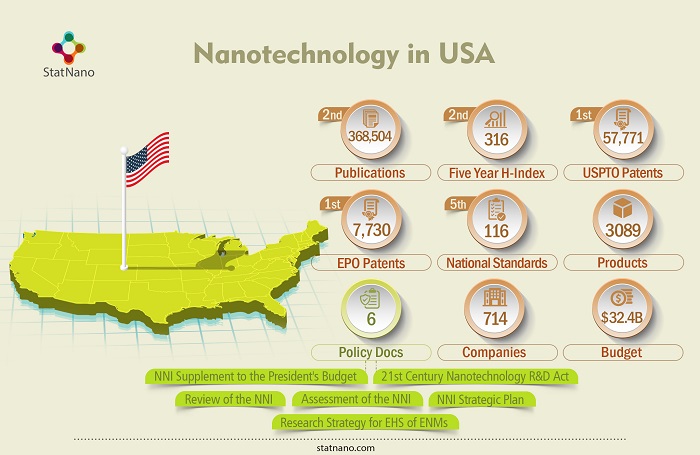