We've covered Nawa extensively in the past. This French company's specialty is the production of vertically aligned carbon nanotubes (VACNT), which it claims to be able to do cheaply and at scale. These nanotubes could enable some impressive advances in battery technology – for example, when used in electrodes, Nawa says they could triple the density of lithium batteries and unlock other battery chemistries offering even higher performance.

But they can also be used as a kind of "nano-velcro," to reinforce the bond between layers of laminates like carbon fiber, a process the company has called Nawastitch after acquiring it in a buy-out of Massachusetts-based company N12 Technologies last year.

Normally, carbon fiber sheets are laid one over another, with their fibers aligned in different directions, and glued together with epoxy. When the finished part is stressed under load, it can deform, and during these deformations, Nawa says the epoxy can be a weak point, deteriorating until the part delaminates and collapses. 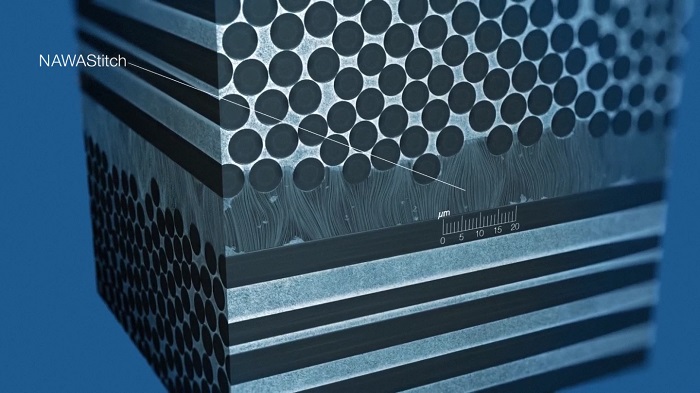 A layer of vertically aligned carbon nanotubes between laminations makes for a much stronger bond.

The Nawastitch process adds VACNTs to the epoxy layers, adding a velcro-like grip that increases shear strength between the layers by two orders of magnitude and shock resistance by one order of magnitude. Impacts, says Nawa, result in 50 percent less damage, and delamination simply doesn't happen.

It's plain to see how this would be handy in MTB wheels, particularly the way professional race teams bash them against rocks, roots and ruts. Nawa has announced a partnership with the Santa Cruz Syndicate, one of the most successful teams on the UCI World Cup and World Championship circuit, in which Santa Cruz will officially use the Nawastitch material in their Reserve-branded carbon race wheels.

We say officially, because Santa Cruz has been racing these nanotube-enhanced carbon rims since 2018. "In downhill racing, the wheels suffer hard, repeated impacts with rocks and roots," says Santa Cruz's senior composite engineer Nic McCrae. "Failures occur when the tire bottoms out and the rim bead cracks. NAWAStitch has made the wheels much stronger, we believe by increasing the buckling resistance of the inner surface of the rims during these high compressions. We’ve had far fewer wheel failures as a result. Through a combination of our own profile design, precise wheel-building and the introduction of NAWAStitch, our Reserve wheels are without doubt the strongest rims on the circuit.”

While neither party has put any numbers on exactly how much better these rims have performed, Nawa says the material "has the potential to dramatically reduce the number of wheel failures experienced by the team over a competitive season by 80 percent."

As yet, these Reserve wheels are, well, reserved for the race team, but Nawa says bringing them to the market as a mass-produced product is a "long-term goal."