The COVID vaccines currently being deployed were developed with unprecedented speed, but the mRNA technology at work in some of them is an equally impressive success story. Because any desired mRNA sequence can be synthesized in massive quantities, one of the biggest hurdles in a variety of mRNA therapies is the ability to package those sequences into the lipid nanoparticles that deliver them into cells.

Now, thanks to manufacturing technology developed by bioengineers and medical researchers at Penn, a hundred-fold increase in current microfluidic production rates may soon be possible. 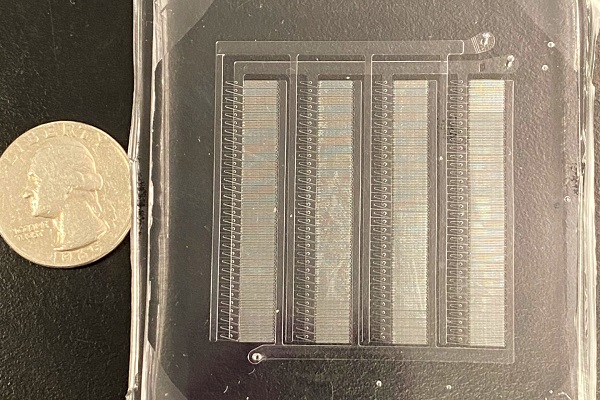 The researchers’ advance stems from their design of a proof-of-concept microfluidic device containing 128 mixing channels working in parallel. The channels mix a precise amount of lipid and mRNA, essentially crafting individual lipid nanoparticles on a miniaturized assembly line.

This increased speed may not be the only benefit; more precisely controlling the nanoparticles’ size could make treatments more effective. The researchers tested the lipid nanoparticles produced by their device in a mouse study, showing they could deliver therapeutic RNA sequences with four-to-five times greater activity than those made by conventional methods.

The study, published in the journal Nano Letters, was led by Michael Mitchell, Skirkanich Assistant Professor of Innovation in Penn Engineering’s Department of Bioengineering, and David Issadore, associate professor in Penn Engineering’s Department of Bioengineering, along with Sarah Shepherd, a doctoral student in both of their labs. Rakan El-Mayta, a research engineer in Mitchell’s lab, and Sagar Yadavali, a postdoctoral researcher in Issadore’s lab, also contributed to the study.

They collaborated with several researchers at the Perelman School of Medicine: postdoctoral researcher Mohamad-Gabriel Alameh, Lili Wang, research associate professor of Medicine, James M. Wilson, Rose H. Weiss Orphan Disease Center Director’s Professor in the Department of Medicine, Claude Warzecha, a senior research investigator in Wilson’s lab, and Drew Weissman, professor of medicine and one of the original developers of the technology behind mRNA vaccines.