Cancer cell death is triggered within three days when X-rays are shone onto tumor tissue containing iodine-carrying nanoparticles. The iodine releases electrons that break the tumor’s DNA, leading to cell death. The findings, by scientists at Kyoto University’s Institute for Integrated Cell-Material Sciences (iCeMS) and colleagues in Japan and the US, were published in the journal Scientific Reports.

“Exposing a metal to light leads to the release of electrons, a phenomenon called the photoelectric effect. An explanation of this phenomenon by Albert Einstein in 1905 heralded the birth of quantum physics,” says iCeMS molecular biologist Fuyuhiko Tamanoi, who led the study. “Our research provides evidence that suggests it is possible to reproduce this effect inside cancer cells.”

A long-standing problem with cancer radiation therapy is that it is not effective at the center of tumors where oxygen levels are low due to the lack of blood vessels penetrating deeply into the tissue. X-ray irradiation needs oxygen to generate DNA-damaging reactive oxygen when the rays hit molecules inside the cell. 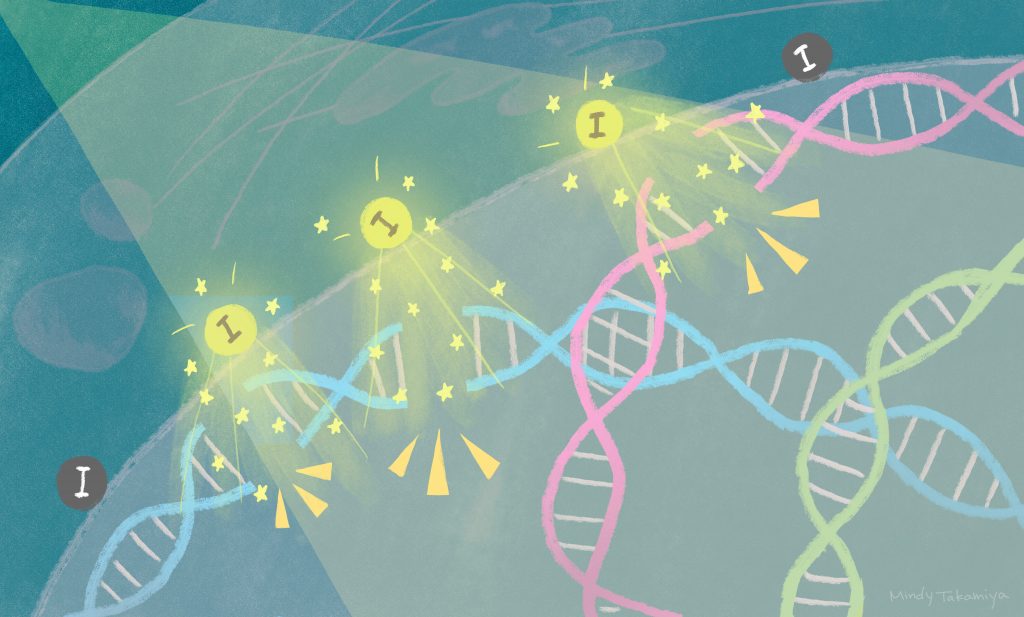 When X-rays are irradiated onto tumor tissue containing iodine-carrying nanoparticles, the iodine releases electrons that break DNA and kill the cancer cells.

Tamanoi, together with Kotaro Matsumoto and colleagues have been trying to overcome this issue by finding more direct ways to damage cancer DNA. In earlier work, they showed that gadolinium-loaded nanoparticles could kill cancer cells when irradiated with 50.25 kiloelectron volts of synchrotron-generated X-rays.

In the current study, they designed porous, iodine-carrying organosilica nanoparticles. Iodine is cheaper than gadolinium and releases electrons at lower energy levels.

The researchers dispersed their nanoparticles through tumor spheroids, 3D tissue containing multiple cancer cells. Irradiating the spheroids for 30 minutes with 33.2 keV of X-rays led to their complete destruction within three days. By systematically changing energy levels, they were able to demonstrate that the optimum effect of tumor destruction occurs with 33.2 keV X-ray.

Further analyses showed that the nanoparticles were taken up by the tumor cells, localizing just outside their nuclei. Shining just the right amount of X-ray energy onto the tissue prompted iodine to release electrons, which then caused double-strand breaks in the nuclear DNA, triggering cell death.

“Our study represents an important example of employing a quantum physics phenomenon inside a cancer cell,” says Matsumoto. “It appears that a cloud of low-energy electrons is generated close to DNA, causing double strand breaks that are difficult to repair, eventually leading to programmed cell death.”

The team next wants to understand how electrons are released from iodine atoms when they are exposed to X-rays. They are also working on placing iodine on DNA rather than near it to increase efficacy, and to test the nanoparticles on mouse models of cancer.