To date, there are no effective antidotes against most virus infections. An interdisciplinary research team at the Technical University of Munich (TUM) has now developed a new approach: they engulf and neutralize viruses with nano-capsules tailored from genetic material using the DNA origami method. The strategy has already been tested against hepatitis and adeno-associated viruses in cell cultures. It may also prove successful against corona viruses.

There are antibiotics against dangerous bacteria, but few antidotes to treat acute viral infections. Some infections can be prevented by vaccination but developing new vaccines is a long and laborious process.

Now an interdisciplinary research team from the Technical University of Munich, the Helmholtz Zentrum München and the Brandeis University (USA) is proposing a novel strategy for the treatment of acute viral infections: The team has developed nanostructures made of DNA, the substance that makes up our genetic material, that can trap viruses and render them harmless.

Even before the new variant of the corona virus put the world on hold, Hendrik Dietz, Professor of Biomolecular Nanotechnology at the Physics Department of the Technical University of Munich, and his team were working on the construction of virus-sized objects that assemble themselves.

In 1962, the biologist Donald Caspar and the biophysicist Aaron Klug discovered the geometrical principles according to which the protein envelopes of viruses are built. Based on these geometric specifications, the team around Hendrik Dietz at the Technical University of Munich, supported by Seth Fraden and Michael Hagan from Brandeis University in the USA, developed a concept that made it possible to produce artificial hollow bodies the size of a virus.

In the summer of 2019, the team asked whether such hollow bodies could also be used as a kind of “virus trap”. If they were to be lined with virus-binding molecules on the inside, they should be able to bind viruses tightly and thus be able to take them out of circulation. For this, however, the hollow bodies would also have to have sufficiently large openings through which viruses can get into the shells.

"None of the objects that we had built using DNA origami technology at that time would have been able to engulf a whole virus – they were simply too small," says Hendrik Dietz in retrospect. "Building stable hollow bodies of this size was a huge challenge."

The kit for a virus trap

Starting from the basic geometric shape of the icosahedron, an object made up of 20 triangular surfaces, the team decided to build the hollow bodies for the virus trap from three-dimensional, triangular plates.

For the DNA plates to assemble into larger geometrical structures, the edges must be slightly beveled. The correct choice and positioning of binding points on the edges ensure that the panels self-assemble to the desired objects.

“In this way, we can now program the shape and size of the desired objects using the exact shape of the triangular plates,” says Hendrik Dietz. “We can now produce objects with up to 180 subunits and achieve yields of up to 95 percent. The route there was, however, quite rocky, with many iterations."

By varying the binding points on the edges of the triangles, the team's scientists can not only create closed hollow spheres, but also spheres with openings or half-shells. These can then be used as virus traps. 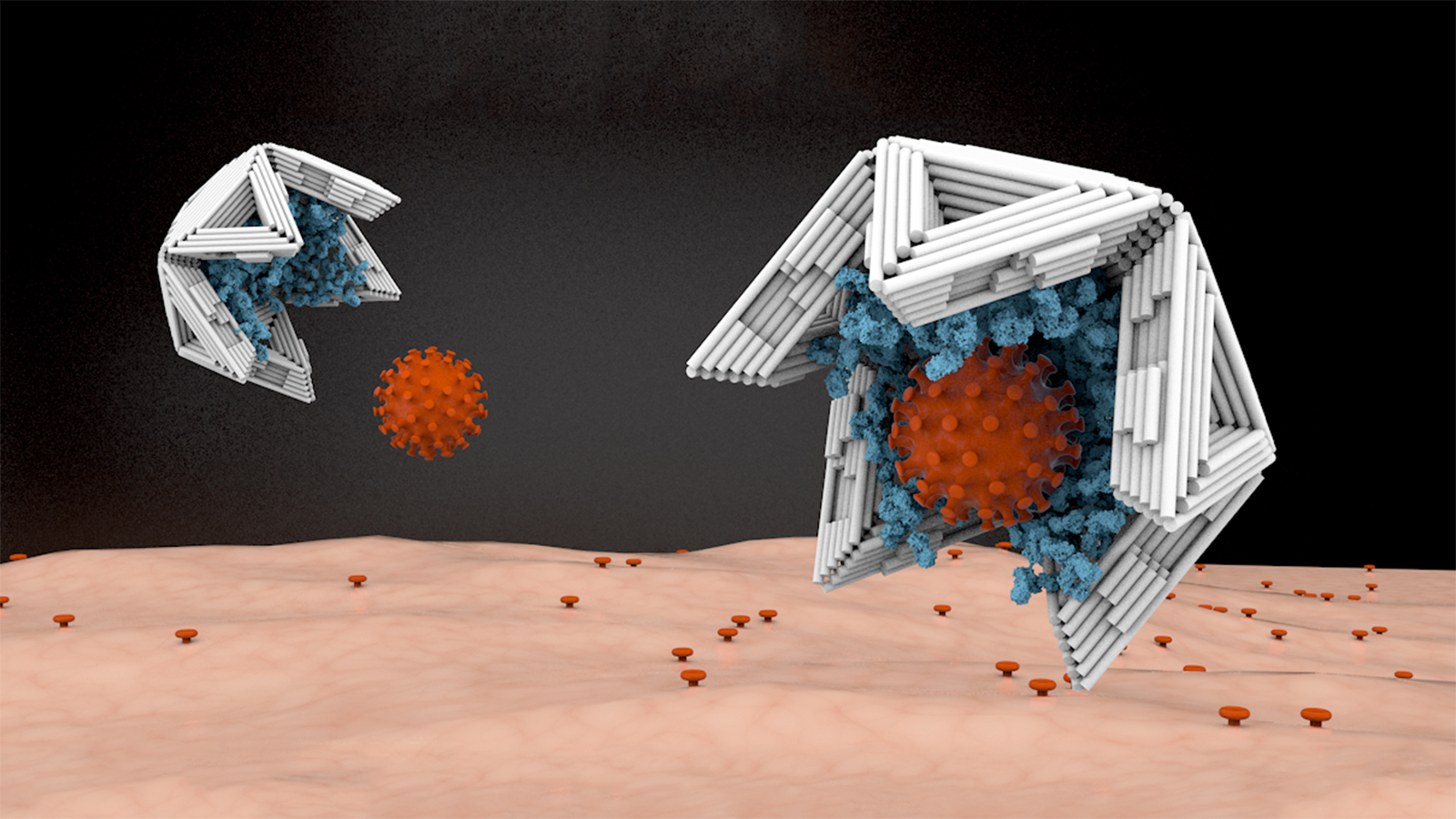 Lined on the inside with virus-binding molecules, nano shells made of DNA material bind viruses tightly and thus render them harmless.

"Even a simple half-shell of the right size shows a measurable reduction in virus activity," says Hendrik Dietz. "If we put five binding sites for the virus on the inside, for example suitable antibodies, we can already block the virus by 80 percent, if we incorporate more, we achieve complete blocking."

To prevent the DNA particles from being immediately degraded in body fluids, the team irradiated the finished building blocks with UV light and treated the outside with polyethylene glycol and oligolysine. The particles were thus stable in mouse serum for 24 hours.

Now the next step is to test the building blocks on living mice. "We are very confident that this material will also be well tolerated by the human body," says Dietz.

“Bacteria have a metabolism. We can attack them in different ways, ” says Prof. Ulrike Protzer. “Viruses, on the other hand, do not have their own metabolism, which is why antiviral drugs are almost always targeted against a specific enzyme in a single virus. Such a development takes time. If the idea of simply mechanically eliminating viruses can be realized, this would be widely applicable and thus an important breakthrough, especially for newly emerging viruses.

The starting materials for the virus traps can be mass-produced biotechnologically at a reasonable cost. "In addition to the proposed application as a virus trap, our programmable system also creates other opportunities," says Hendrik Dietz. "It would also be conceivable to use it as a multivalent antigen carrier for vaccinations, as a DNA or RNA carrier for gene therapy or as a transport vehicle for drugs."

Read the original article on The Technical University of Munich.