Bioplastic Made of Nanocellulose and Mango to Improve Food Preservation

Researchers from the Universities of Cadiz (Spain) and University of Aveiro (Portugal) have developed a bioactive and biodegradable packaging, made with cellulose from the paper industry and extracts of mango fruit leaves, that mantains the properties of food longer without the need for chemical additives. This film contains in vitro-tested antimicrobial and antioxidant compounds, as well as a stronger UV light filter that delays food decomposition.

The ‘Analysis and design of processes with supercritical fluids’ research team at the University of Cadiz (Spain), together with researchers from the University of Aveiro (Portugal) from the research group ‘Biopol4fun’, have developed a bioactive or functionalised plastic made from nanofibrillated cellulose and mango leaf extracts that preserves food longer than non-functionalised plastics.

This packaging is intended to maintain the properties of food for a longer period without the need to add chemical additives, as the packaging itself acts as an active barrier that favours preservation. This is because this biodegradable film contains antimicrobial and antioxidant compounds from mango leaf extract that have been tested in vitro, while at the same time offering a more powerful ultraviolet light filter that delays food spoilage.

In order to reach these conclusions, the researchers compared two different techniques for obtaining the packaging. The conventional one consists of dissolving the components in a solvent, which is later removed. The other alternative procedure does not require the use of chemical solvents, but uses supercritical CO2 to functionalize the polymer, which provides the bioplastic with more effective physico-chemical and bioactive properties than those obtained by conventional treatment. The novelty of this study lies in the fact that it validates the latter method of obtaining this film which prolongs food preservation and, at the same time, acts as a barrier against food pathogens.

This bioactive packaging, that is, with antimicrobial and antioxidant properties from mango leaf extract, increases the protective barrier against ultraviolet light. “Thanks to it, food wrapped in this film could be preserved longer without the addition of preservatives. The film itself replaces the chemical additive, since the active substance exerts its effect via the packaging without the need to add anything to the food,” Cristina Cejudo, researcher at the University of Cadiz and co-author of the study, pointed out to Fundación Descubre.

To develop this bioplastic, the experts used mango leaf extracts from pruning remains from the cultivation of this fruit at the experimental farm of the Institute of Subtropical and Mediterranean Horticulture ‘La Mayora’ in Malaga (Spain). The nanofibrillated cellulose that forms the polymer comes from the chemical and enzymatic treatment of a paper industry waste product. 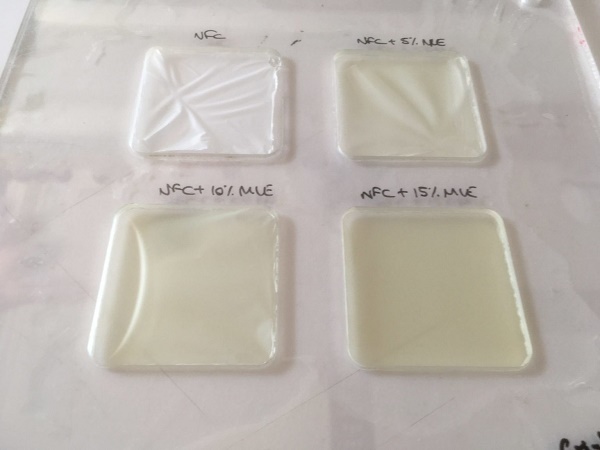 Bioactive or functionalised plastic made from nanofibrillated cellulose and mango leaf extracts.

With these materials, the research team has used two different procedures to compare their physical properties and bioactive function, as explained in the study entitled ‘Biobased films of nanocellulose and mango leaf extract for active food packaging: Supercritical impregnation versus solvent casting’, published in the journal Food Hydrocolloids.

On the one hand, researchers used the conventional casting method, which consists of adding the active compound before polymerising the plastic, that is, before binding its compounds. The process therefore consists of dissolving the mango leaf extract and the nanocellulose and subsequently polymerising and drying the solvents at a temperature of 45ºC.

For the treatment based on the supercritical impregnation technology, they used an extract previously obtained by the same technique. “By doing so, a better dissolution of the extract is achieved during the impregnation of the polymer, since the mango extract penetrates into the composition of the nanocellulose at the surface level, which favours the migration of the active compounds, thereby taking less time to exert its preservative action,” explains researcher Cejudo.

An additional advantage of the supercritical technique is that the pathogen inhibition is higher due to the selection of the most bioactive compounds in mango extract for supercritical impregnation. This gives the plastic a higher concentration of these compounds than the conventional technique. “As a result, the active properties of the mango remain intact after impregnation, which increases the film’s ability to protect food,” says Cejudo.

With these results, the research team has verified the effectiveness of the supercritical impregnation technique to obtain this new bioactive packaging. “This treatment is effective and valid because it helps to preserve food with a more perishable shelf life and also offers the advantage that it can be applied without the use of solvents or artificial chemical compounds,” says the expert.

Whereas with the conventional method the container is orange-coloured due to a stronger interaction of the mango with the polymer, with the supercritical impregnation it acquires a greenish colour, similar to that of the original mixture, because the deposition is more superficial, which also favours a faster performance of the compounds during packaging.

In vitro tests on food pathogens

At the same time and in order to test the efficacy of the new packaging obtained by supercritical impregnation, the research team evaluated in vitro the antimicrobial performance against two food pathogens: Staphylococcus aureus and Escherichia coli.

With this test, they found that the mango polyphenols present in the bioactive film prevent the spread of both microorganisms due to their antimicrobial properties. “This result shows that the new bioplastic can be used as packaging to inhibit the spread of pathogens and prevent food spoilage,” points out Cejudo.

Besides, the presence of the extract in the film increases the UV-barrier, which reduce the amount of incident light that also causes food spoilage, especially on foods containing oxidable compounds such as lipids.

This study is in addition to a similar one they carried out a year ago to design another novel form of packaging using a food plastic to which they added beetroot extract, rich in antioxidant compounds. After carrying out a preliminary test, they achieved a product that aims to improve the characteristics of the containers currently used to give longer shelf life to the food without it losing its properties.

The next step for this research team will be to study how this bioactive packaging responds to preserving especific foods and to analyse its performance at pilot scale.

Researchers Create Contamination Test for Dairy Products, Using Technology That Can Be Printed Inside Containers