Göttingen researchers have developed mini-antibodies that efficiently block the coronavirus and its new variants.

Göttingen researchers have developed mini-antibodies that efficiently block the coronavirus Sars-CoV-2 and its dangerous new variants. These so-called nanobodies bind and neutralize the virus up to 1000 times better than previously developed mini-antibodies. In addition, the scientists optimized their mini-antibodies for stability and resistance to extreme heat. This unique combination makes them promising agents to treat Covid-19. Since nanobodies can be produced at low costs in large quantities, they could meet the global demand for Covid-19 therapeutics. The new nanobodies are currently in preparation for clinical trials. 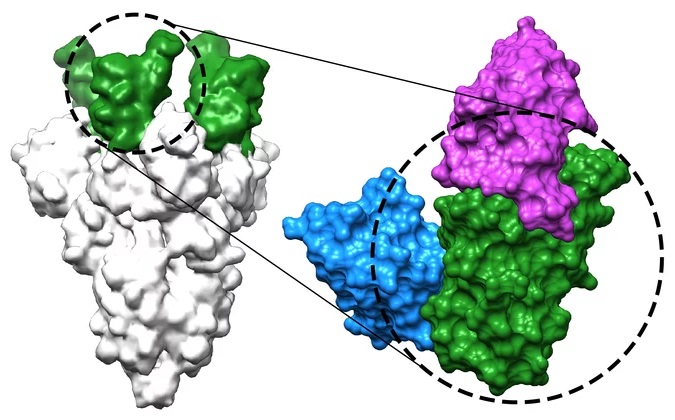 Two of the newly developed nanobodies (blue and magenta) bind to the receptor-binding domain (green) of the coronavirus spike protein (grey), thus preventing infection with Sars-CoV-2 and its variants.

Antibodies help our immune system to fend off pathogens. For example, the molecules attach to viruses and neutralize them so that they can no longer infect cells. Antibodies can also be produced industrially and administered to acutely ill patients. They then act like drugs, relieving symptoms and shortening recovery from the disease. This is established practice for treating hepatitis B and rabies. Antibodies are also used for treating COVID-19 patients. However, producing these molecules on an industrial scale is too complex and expensive to meet worldwide demand. Nanobodies could solve this problem.

At first glance, the new nanobodies hardly differ from anti-Sars-CoV-2 nanobodies developed by other labs. They are all directed against a crucial part of the coronavirus spikes, the receptor-binding domain that the virus deploys for invading host cells. The nanobodies block this binding domain and thereby prevent the virus from infecting cells.

“Our nanobodies can withstand temperatures of up to 95 °C without losing their function or forming aggregates,” explains Matthias Dobbelstein, professor and director of the University Medical Center Göttingen’s Institute of Molecular Oncology. “For one thing, this tells us that they might remain active in the body long enough to be effective. For another, heat-resistant nanobodies are easier to produce, process, and store.”

The simplest mini-antibodies developed by the Göttingen team already bind up to 1000 times more strongly to the spike protein than previously reported nanobodies. They also bind very well to the mutated receptor-binding domains of the Alpha, Beta, Gamma, and Delta strains. “Our single nanobodies are potentially suitable for inhalation and thus for direct virus neutralization in the respiratory tract,” Dobbelstein says. “In addition, because they are very small, they could readily penetrate tissues and prevent the virus from spreading further at the site of infection.”

A ‘nanobody triad’ further improves binding: The researchers bundled three identical nanobodies according to the symmetry of the spike protein, which is comprised of three identical building blocks with three binding domains. “With the nanobody triad, we literally join forces: In an ideal scenario, each of the three nanobodies attaches to one of the three binding domains,” reports Thomas Güttler, a scientist in Görlich’s team. “This creates a virtually irreversible bond. The triple will not let release the spike protein and neutralizes the virus even up to 30,000-fold better than the single nanobodies.” Another advantage: The larger size of the nanobody triad expectedly delays renal excretion. This keeps them in the body for longer and promises a longer-lasting therapeutic effect.

As a third design, the scientists produced tandems. These combine two nanobodies that target different parts of the receptor-binding domain and together can bind the spike protein. “Such tandems are extremely resistant to virus mutations and the resulting ‘immune escape’ because they bind the viral spike so strongly”, explains Metin Aksu, a researcher in Görlich’s team.

For all nanobody variants – monomeric, double as well as triple – the researchers found that very small amounts are sufficient to stop the pathogen. If used as a drug, this would allow for a low dosage and thus for fewer side effects and lower production costs. 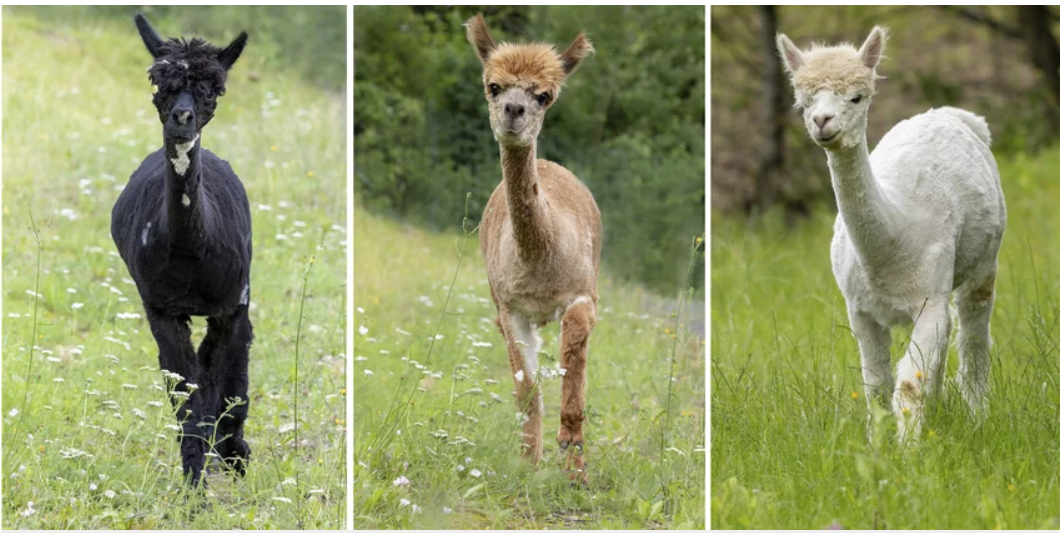 The three alpaca mares Britta, Nora, and Xenia (from left) delivered the blueprints for the Covid-19 nanobodies.

“Our nanobodies originate from alpacas and are smaller and simpler than conventional antibodies,” Görlich says. To generate the nanobodies against Sars-CoV-2, the researchers immunized three alpacas – Britta, Nora, and Xenia from the herd at the Max Planck Institute for Biophysical Chemistry – with parts of the coronavirus spike protein. The mares then produced antibodies, and the scientists drew a small blood sample from the animals. For the alpacas, the mission was then complete, as all further steps were carried out with the help of enzymes, bacteria, so-called bacteriophages, and yeast. “The overall burden on our animals is very low, comparable to vaccination and blood testing in humans,” Görlich explains.

Görlich’s team extracted around one billion blueprints for nanobodies from the alpacas’ blood. What then followed was a laboratory routine perfected over many years: The biochemists used bacteriophages to select the very best nanobodies from the initially vast pool of candidates. These were then tested for their efficacy against Sars-CoV-2 and further improved in successive rounds of optimization.

Not every antibody is ‘neutralizing’. Researchers of Dobbelstein’s group therefore determined if and how well the nanobodies prevent the viruses from replicating in cultured cells in the lab. “By testing a wide range of nanobody dilutions, we find out which quantity suffices to achieve this effect,” explains Antje Dickmanns from Dobbelstein’s team. Her colleague Kim Stegmann adds: “Some of the nanobodies were really impressive. Less than a millionth of a gram per liter of medium was enough to completely prevent infection. In the case of the nanobody triads, even another twenty-fold dilution was sufficient.“

Over the course of the coronavirus pandemic, new virus variants have emerged and rapidly became dominant. These variants are often more infectious than the strain that first appeared in Wuhan (China). Their mutated spike protein can also ‘escape’ neutralization by some originally effective antibodies of infected, recovered, or vaccinated persons. This makes it more difficult even for an already trained immune system to eliminate the virus. This problem also affects previously developed therapeutic antibodies and nanobodies.

This is where the new nanobodies show their full potential, as they are also effective against the major coronavirus variants of concern. The researchers had inoculated their alpacas with part of the spike protein of the first known Sars-CoV-2 virus, but remarkably, the animals’ immune system also produced antibodies that are active against the different virus variants. “Should our nanobodies prove ineffective against a future variant, we can reimmunize the alpacas. Since they have already been vaccinated against the virus, they would very quickly produce antibodies against the new variant,” Güttler asserts confidently.

The Göttingen team is currently preparing the nanobodies for therapeutic use. Dobbelstein emphasizes: “We want to test the nanobodies as soon as possible for safe use as a drug so that they can be of benefit to those seriously ill with Covid-19 and those who have not been vaccinated or cannot build up an effective immunity.”