Scientists from Japan mimic the brain's functions with junctions between vertically aligned graphene and diamond.

The human brain holds the secret to our unique personalities. But did you know that it can also form the basis of highly efficient computing devices? Researchers from Nagoya University, Japan, recently showed how to do this, through graphene-diamond junctions that mimic some of the human brain's functions.

But, why would scientists try to emulate the human brain? Today, existing computer architectures are subjected to complex data, limiting their processing speed. The human brain, on the other hand, can process highly complex data, such as images, with high efficiency. Scientists have, therefore, tried to build "neuromorphic" architectures that mimic the neural network in the brain.

A phenomenon essential for memory and learning is "synaptic plasticity," the ability of synapses (neuronal links) to adapt in response to an increased or decreased activity. Scientists have tried to recreate a similar effect using transistors and "memristors" (electronic memory devices whose resistance can be stored). Recently developed light-controlled memristors, or "photomemristors," can both detect light and provide non-volatile memory, similar to human visual perception and memory. These excellent properties have opened the door to a whole new world of materials that can act as artificial optoelectronic synapses!

This motivated the research team from Nagoya University to design graphene-diamond junctions that can mimic the characteristics of biological synapses and key memory functions, opening doors for next-generation image sensing memory devices. In their recent study published in Carbon, the researchers, led by Dr. Kenji Ueda, demonstrated optoelectronically controlled synaptic functions using junctions between vertically aligned graphene (VG) and diamond. The fabricated junctions mimic biological synaptic functions, such as the production of "excitatory postsynaptic current" (EPSC)--the charge induced by neurotransmitters at the synaptic membrane--when stimulated with optical pulses and exhibit other basic brain functions such as the transition from short-term memory (STM) to long-term memory (LTM).

Dr. Ueda explains, "Our brains are well-equipped to sieve through the information available and store what's important. We tried something similar with our VG-diamond arrays, which emulate the human brain when exposed to optical stimuli." He adds, "This study was triggered due to a discovery in 2016, when we found a large optically induced conductivity change in graphene-diamond junctions." Apart from EPSC, STM, and LTM, the junctions also show a paired pulse facilitation of 300%--an increase in postsynaptic current when closely preceded by a prior synapse. 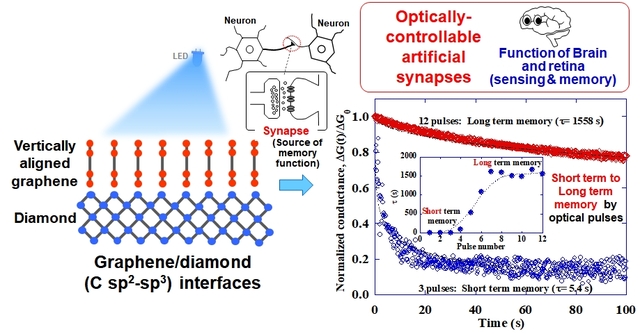 The VG-diamond arrays underwent redox reactions induced by fluorescent light and blue LEDs under a bias voltage. The researchers attributed this to the presence of differently hybridized carbons of graphene and diamond at the junction interface, which led to the migration of ions in response to the light and in turn allowed the junctions to perform photo-sensing and photo-controllable functions similar to those performed by the brain and retina. In addition, the VG-diamond arrays surpassed the performance of conventional rare-metal-based photosensitive materials in terms of photosensitivity and structural simplicity.

The future of next-generation computing may not be too far away.