A research team has succeeded in designing a silica nanostructure (SiJAR) as an artificial organelle for the selective synthesis of enantiomers in cells.

As COVID-19 vaccinations are well underway, people await a return to normal life. However, fears also grow due to unforeseen side effects like the rare thrombosis. In the body, life is maintained by the movement of substances or energy. Chemical reactions are regulated by the presence of organelles or core structures of cells that accommodate specific enzymes or cofactors.

A nanoreactor with both the activity of a synthetic catalyst, such as an artificial organelle that mimics a cell, and the properties of an enzyme creates a platform for selectively synthesizing natural enantiomeric bioactive molecules that can respond to pathogens – such as drugs – in the body. However, until now, a nanoreactor with the functions of both a synthetic catalyst and an enzyme for such a platform has not been reported.

To this, a research team at POSTECH has recently synthesized a chemo-enzymatic nanostructure that can selectively synthesize one enantiomer while acting like an artificial organelle in the cell.

A research team led by Professor In Su Lee, Research Professor Amit Kumar, and Ph.D. candidate Seonock Kim of POSTECH’s Department of Chemistry has succeeded in designing a silica nanostructure (SiJAR) as an artificial organelle for selective synthesis of enantiomers in cells. This research finding was selected as the front cover of Angewandte Chemie, a prestigious academic journal in the field of chemistry and published online on June 21, 2021. 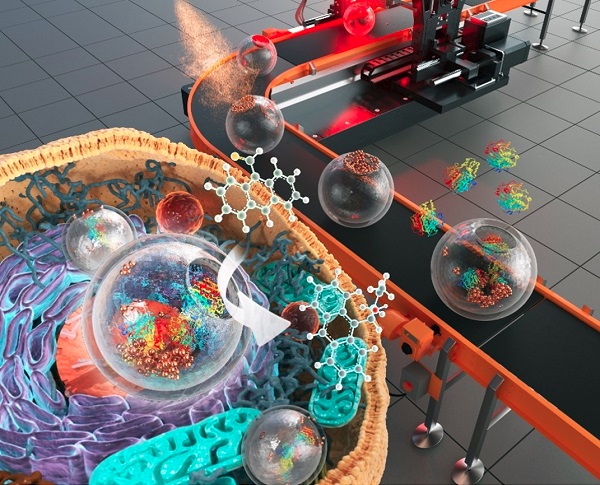 The research team synthesized round jar-shaped SiJARs with chemo-responsive metal-silicate lids by modifying the chemical composition of a section in the reactor using spatiotemporal-controlled thermal conversion chemistry. Due to the divided configuration of SiJAR, different catalytic noble metals (Pt, Pd, Ru) were selectively modified on the lid-section by galvanic reactions. Subsequently, the lid was opened under mild acidic conditions or an intracellular environment, creating a wide-passage into the shell while shifting the residual metal catalyst of the lid inwards. This open structure accommodates large enzymes, thus facilitating encapsulation.

The nanoreactor synthesized in this study is composed of silica with high biocompatibility and by protecting catalytic nanocrystals or large biomolecules in an open-mouth silica-compartment, it performed asymmetric aldol reaction with high enantioselectivity via an enzyme-metal co-operative transition state stabilization. In addition, the researchers confirmed that it functions as an artificial catalytic organelle by stably performing the reaction inside living cells.

The hybrid chemoenzymatic nanodevice, customizable through this sophisticated solid-state conversion strategy, has a structure and function similar to that of intracellular organelles, and can be utilized for synthesizing active therapeutics and bioimaging probes locally inside cells to be suitable for use in next generation bioimaging and treatment.

“With the results of this research using the unique Nanospace-Confined Chemical Reactions (NCCR), we look forward to developing the technology that artificially regulates cell functions,” commented Professor In Su Lee who led the study.