The findings could inform the design of new materials such as iridescent windows or waterproof textiles.

If you brush against the wings of a butterfly, you will likely come away with a fine sprinkling of powder. This lepidopteran dust is made up of tiny microscopic scales, hundreds of thousands of which paper a butterfly’s wings like shingles on a wafer-thin roof. The structure and arrangement of these scales give a butterfly its color and shimmer, and help shield the insect from the elements.

Now, MIT engineers have captured the intricate choreography of butterfly scales forming during metamorphosis. The team has for the first time continuously observed the wing scales growing and assembling as a developing butterfly transforms inside its chrysalis. 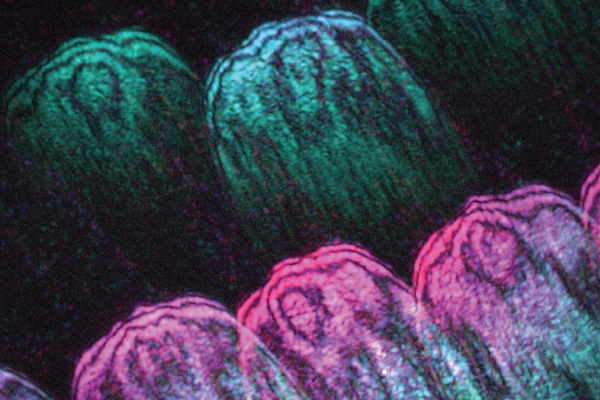 Larger, overlapping scales in red and green begin to form their structural details midway through development (right). Each image is 75 μm wide.

With some minor surgery and a clever imaging approach, the researchers were able to watch wing scales form in specimens of Vanessa cardui, commonly known as the Painted Lady butterfly. They observed that, as a wing forms, cells on its surface line up in orderly rows as they grow. These cells quickly differentiate into alternating “cover” and “ground” scales, producing an overlapping shingle-like pattern. As they reach their full size, the scales sprout thin ridges along their length — tiny corrugated features that control the insect’s color and help it to shed rain and moisture.

The team’s study, published today in the Proceedings of the National Academy of Sciences, offers the most detailed look yet at the budding architecture of butterfly scales. The new visualizations also could serve as a blueprint for designing new functional materials, such as iridescent windows and waterproof textiles.

“Butterfly wings control many of their attributes by precisely forming the structural architecture of their wing scales,” says lead author Anthony McDougal, a research assistant in MIT’s Department of Mechanical Engineering. “This strategy might be used, for example, to give both color and self-cleaning properties to automobiles and buildings. Now we can learn from butterflies’ structural control of these complex, micro-nanostructured materials.” 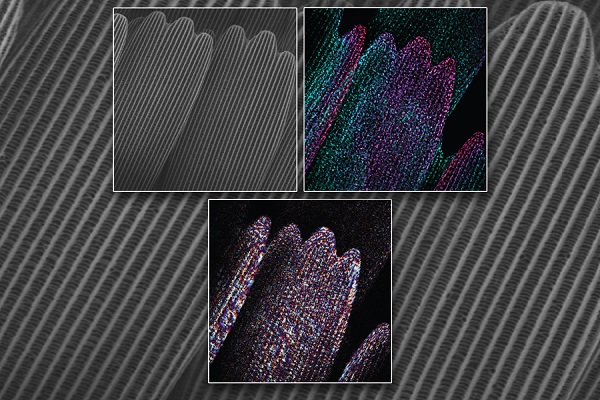 The cross-section of a butterfly’s wing reveals an intricate scaffold of scales and ribs whose structure and arrangement varies from species to species. These microscopic features act as tiny reflectors, bouncing light around to give a butterfly its color and shine. The ridges on a wing’s scales serve as miniature rain gutters and radiators, funneling moisture and heat to keep the insect cool and dry.

Researchers have tried to replicate the optical and structural properties of butterfly wings to design new solar cells and optical sensors, rain- and heat-resistant surfaces, and even paper currency patterned with iridescent encryptions to discourage counterfeiting. Knowing what processes butterflies harness to grow their scales could help to further direct this kind of bioinspired technology development.

Currently, what’s known about scale formation is based on still images of developing and mature butterfly wings.

“Previous studies provide compelling snapshots at select stages of development; unfortunately, they don’t reveal the continuous timeline and sequence of what happens as scale structures grow,” Kolle says. “We needed to see more to start understanding it better.”

In their new study, he and his colleagues looked to continuously observe how scales grow and assemble in a living, morphing butterfly. They chose to study specimens of Vanessa cardui, as the butterfly’s wings have features that are common across most lepidopteran species.

The team raised Painted Lady caterpillars in individual containers. Once each caterpillar encased itself in a chrysalis, indicating the beginning of its metamorphosis, the researchers carefully cut into the paper-thin material and peeled away a small square of cuticle, or covering of the developing wing, exposing the scales growing underneath. They then used a bioadhesive to stick a transparent coverslip over the opening, creating a window through which they could watch as the butterfly and its scales continued to form.

To visualize this transformation, Kolle and McDougal teamed up with Kang, Yaqoob, and So — experts in a type of imaging called speckle-correlation reflection phase microscopy. Rather than shine a wide beam of light on the wing, which could be phototoxic to the delicate cells, the team applied a “speckle field” — many small points of light, each shining on a specific point on the wing. The reflection of each tiny light can be measured in parallel with every other point in the field to quickly create a detailed, three-dimensional map of the wing’s structures.

“A speckled field is like thousands of fireflies that generate a field of illumination points,” So says. “Using this method, we can isolate the light coming from different layers, and can reconstruct the information to map efficiently a structure in 3D.”

In their visualizations of the growing butterfly wing, the team watched the formation of highly detailed features, from micrometer-sized scales to even finer, nanometer-high ridges on individual scales.

They observed that, within days, cells quickly lined up in rows, and soon after differentiated in an alternating pattern of cover scales (those overlying the wing) and ground scales (those tucked underneath). As they reached their final size, each scale grew long, thin ridges resembling tiny corrugated roofing.

“A lot of these stages were understood and seen before, but now we can stitch them all together and watch continuously what’s happening, which gives us more information on the detail of how scales form,” McDougal says.

Interestingly, the team found that ridges on scales formed in an unexpected way. Scientists had assumed these grooves were a consequence of compression: As scales grow, they were thought to squeeze in like an accordion. But the team’s visualizations showed that instead of shrinking as any material would when compressed, the scales continued to grow in size as ridges appeared on their surface. These measurements suggest another ridge-forming mechanism must be at work. The group hopes to explore this, and other processes in the developing butterfly wing, which can help to inform the design of new functional materials.

A New Antimicrobial Cotton Textile with Cu Ions in Nanofibers