Demand for sensitive and selective electronic biosensors — analytical devices that monitor a target of interest in real time — is growing for a wide range of applications. They are ideal for health care within clinical settings, drug discovery, food safety and quality control, and environmental monitoring.

Electronic biosensors are appealing due to their simplicity, short analysis time, low fabrication cost, minimal sample preparation, and potential to be used out in the field by untrained personnel. 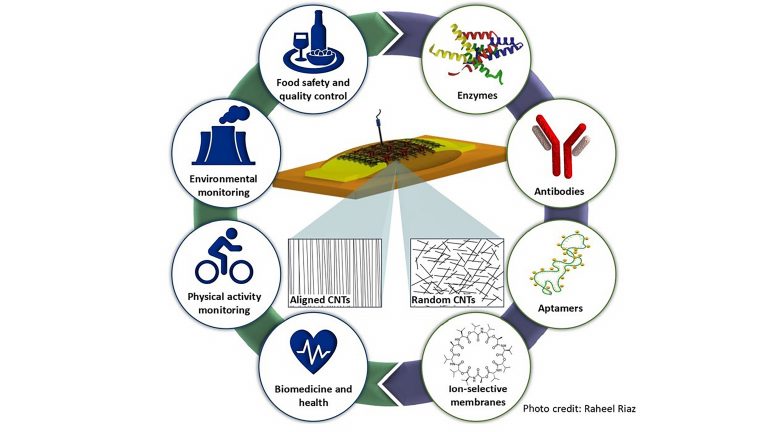 One of the main components of a biosensor is its biorecognition element, such as enzymes, antibodies, aptamers, or ion-selective membranes, which selectively recognizes the analyte (a substance whose chemicals are measured and identified) of interest. Biotransduction devices convert the interaction between the biorecognition element and analyte into a measurable signal, such as an electrical signal.

“Biosensors using (field-effect transistors) as biotransduction elements are one of the most promising devices for biosensing applications, because they have already demonstrated high sensitivities toward several analytes down to picomolar concentration,” said Mattia Petrelli, from Free University of Bozen-Bolzano. “Among all the possible materials that can be used for FET-based biosensors, semiconducting carbon nanotubes are interesting, because they have favorable electrical and chemical properties.”

By organizing these biosensors with different biorecognition elements, “it is possible to achieve selective detection of different analytes, such as biomolecules, cancer biomarkers, bacteria, and ions to name only a few,” said Petrelli. “Despite reports that demonstrate the potential translation of these biosensors to real-world applications, challenges must be overcome before they are commercially available.”

EG-CNTFET-based biosensors are currently capable of detecting only one analyte at a time. Different interfaces within complex media, such as blood, sweat, or saliva, also make detection of specific signals challenging.

“This limits the applicability of these biosensors for real-life applications,” Petrelli said. “The selectivity of the device should be carefully evaluated against all possible interfering agents, especially within complex detection environments. Once these challenges are tackled, we can envision these biosensors being implemented for diverse applications within the near future.”