The iridescent shimmer that makes birds such as peacocks and hummingbirds so striking is rooted in a natural nanostructure so complex that people are only just beginning to replicate it technologically. The secret to how birds produce these brilliant colors lies in a key feature of the feather’s nanoscale design, according to a study led by Princeton University researchers and published in the journal eLife.

The researchers found an evolutionary tweak in feather nanostructure that has more than doubled the range of iridescent colors birds can display. This insight could help researchers understand how and when brilliant iridescence first evolved in birds, as well as inspire the engineering of new materials that can capture or manipulate light.

As iridescent birds move, nanoscale structures within their feathers’ tiny branch-like filaments — known as barbules — interact with light to amplify certain wavelengths depending on the viewing angle. This iridescence is known as structural coloration, wherein crystal-like nanostructures manipulate light.

“If you take a single barbule from an iridescent feather, cross-section it and put it under an electron microscope, you’ll see an ordered structure with black dots, or sometimes black rings or platelets, within a gray substrate,” said first author Klara Nordén, a Ph.D. student in the lab of senior author Mary Caswell Stoddard, associate professor of ecology and evolutionary biology at Princeton and associated faculty in Princeton’s High Meadows Environmental Institute (HMEI). “The black dots are pigment-filled sacs called melanosomes, and the gray surrounding them is feather keratin. I find these nanoscale structures just as beautiful as the colors they produce.” 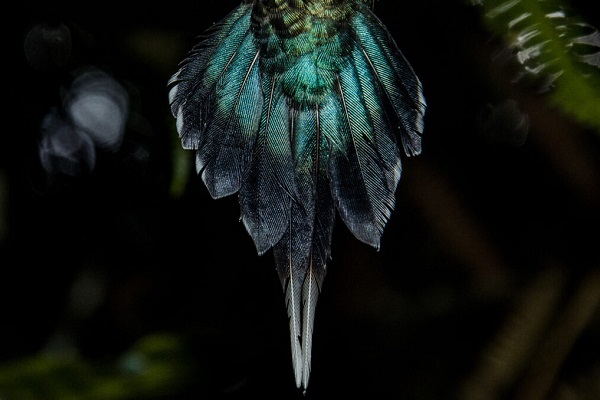 Pictured is the iridescent tail of the green hermit (Phaethornis guy). The researchers found that thin melanin layers within the tiny branch-like filaments of feathers interact with light to amplify certain wavelengths depending on the viewing angle. This insight could help researchers understand how and when iridescence first evolved in birds, as well as inspire the development of new materials that can capture or manipulate light.

To answer this question, the researchers combined evolutionary analysis, optical modeling and plumage measurements — all of which allowed them to uncover general design principles behind iridescent feather nanostructures.

Nordén and Stoddard worked with co-author Chad Eliason, a postdoctoral fellow at The Field Museum, to first survey the literature and compile a database of all described iridescent feather nanostructures in birds, which included more than 300 species. They then used a family tree of birds to illustrate which groups evolved the different melanosome types.

There are five primary types of melanosomes in iridescent feather nanostructures: thick rods, thin rods, hollow rods, platelets and hollow platelets. Except for thick rods, all of these melanosome types are found in brilliantly colored plumage. Because the ancestral melanosome type is rod-shaped, previous work focused on the two obvious features unique to iridescent structures: platelet shape and hollow interior.

There are five primary types (bottom row) of pigment-filled sacks, called melanosomes, within the nanostructure (left) of iridescent feathers. Thick rods are found in birds with weak iridescent coloring such as in the brown-headed cowbird (top row, left), while all other types produce brilliant iridescence. The researchers found that the four melanosome types linked to brilliant iridescence have developed distinct melanin layers (second row) of just the right thickness to greatly increase the range of color different bird species can display. Microscope images adapted from Durrer (1977).

However, when the researchers evaluated the results of their survey, they realized that there was a third melanosome feature that has been overlooked — thin melanin layers. All four melanosome types in iridescent feathers — thin rods, hollow rods, platelets and hollow platelets — create thin melanin layers, much thinner than a structure built with thick rods. This is important because the size of the layers in the structures is key to producing vibrant colors, Nordén said.

“Theory predicts that there is a kind of Goldilocks zone in which the melanin layers are just the right thickness to produce really intense colors in the bird-visible spectrum,” she said. “We suspected that thin rods, platelets or hollow forms may be alternative ways to reach that ideal thickness from the much larger ancestral melanosome size — the thick rods.”

The researchers tested their idea on bird specimens at the American Museum of Natural History in New York City by measuring the color of iridescent bird plumage that results from nanostructures with different melanosome types. They also used optical modeling to simulate the colors that would be possible to produce with different types of melanosomes.

From these data, the researchers determined which feature — thin melanin layers, platelet shape or hollowness — has the greatest influence on the range and intensity of color. Combining the results of the optical modeling and plumage analyses, the researchers determined that thin melanin layers — no matter the shape of the melanosomes — nearly doubled the range of colors an iridescent feather could produce. 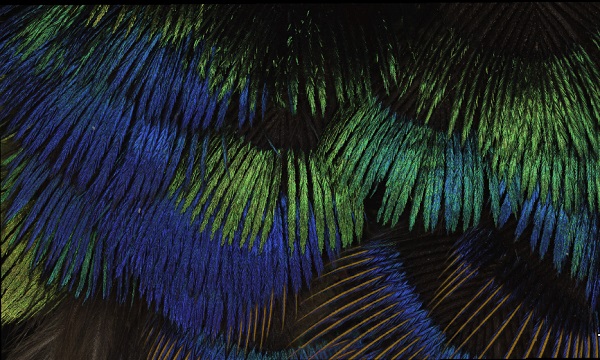 The sparkling metallic colors of birds such as the Mariqua sunbird (Cinnyris mariquensis) (pictured) are produced by structural coloration, wherein crystal-like nanostructures manipulate light. These natural structures could be used to develop eco-friendly paints that do not require dyes or pigments. (Microscopy image by Rosalyn Price-Waldman and Klara Nordén, Department of Ecology and Evolutionary Biology).

This may explain why there exists such a great diversity of melanosome types in iridescent nanostructures. Iridescent nanostructures likely evolved many times in different groups of birds, but, by chance, thin melanin layers evolved from a thick rod in different ways. Some groups evolved thin melanin layers by flattening the melanosomes (producing platelets), others by hollowing out the interior of the melanosome (producing hollow forms), and yet others by shrinking the size of the rod (producing thin rods).

The findings of the study could be used to reconstruct brilliant iridescence in prehistoric animals, Nordén said. Melanosomes can be preserved in fossil feathers for millions of years, which means that paleontologists can infer original feather color — even iridescence — in birds and dinosaurs by measuring the size of fossilized melanosomes.

“Based on the thick solid rods that have been described in the plumage of Microraptor, for example, we can say that this feathered theropod likely had iridescent plumage much more like that of a starling than that of a peacock,” Nordén said.

The composition of melanosomes and keratin in bird feathers could hold clues for engineering advanced iridescent nanostructures that can efficiently capture or manipulate light, or be used to produce eco-friendly paints that do not require dyes or pigments. Super-black coatings such as Vantablack similarly use nanostructures that absorb and disperse rather than reflect light, similar to the black plumage of species in the birds-of-paradise (Paradisaeidae) family.

Iridescent feathers also could lead to a richer understanding of multifunctional materials, Nordén said. Unlike human-made materials, which are often developed for a single function, natural materials are inherently multipurpose. Melanin not only helps produce iridescence; it also protects birds from dangerous ultraviolet radiation, strengthens feathers and inhibits microbial growth.

“What if the different types of melanosomes initially evolved for some reason unrelated to the iridescent color — such as for making the feather mechanically stronger, or more resistant to microbial attack,” Nordén said. “These are some of the questions we are excited to tackle next.”