In recent years, deadly infectious diseases, including Ebola and COVID-19, have emerged to cause widespread human devastation. Although researchers have developed a range of sophisticated methods to detect such infections, existing diagnostics face many limitations.

In a new study, Chao Wang, a researcher at Arizona State University’s Biodesign Institute and School of Electrical, Computer & Energy Engineering, along with ASU colleagues and collaborators at the University of Washington (UW), Seattle describe a novel method for detecting viruses like Ebola virus (EBOV) and SARS CoV-2.

The technique, known as Nano2RED, is a clever twist on conventional high-accuracy tests relying on complex testing protocols and expensive readout systems. The in-solution nano-sensors (“Nano2” in the name) serve to detect disease antigens in a sample by simple mixing. The innovative Rapid and Electronic Readout process (“RED”) developed in the Wang lab delivers test results, which are detectable as a color change in the sample solution, and record the data through inexpensive semiconductor elements such as LEDs and photodetectors.

The technology represents a significant advance in the fight against infectious diseases. It can be developed and produced at very low cost, deployed within weeks or days after an outbreak, and made available for around 1 cent per test. 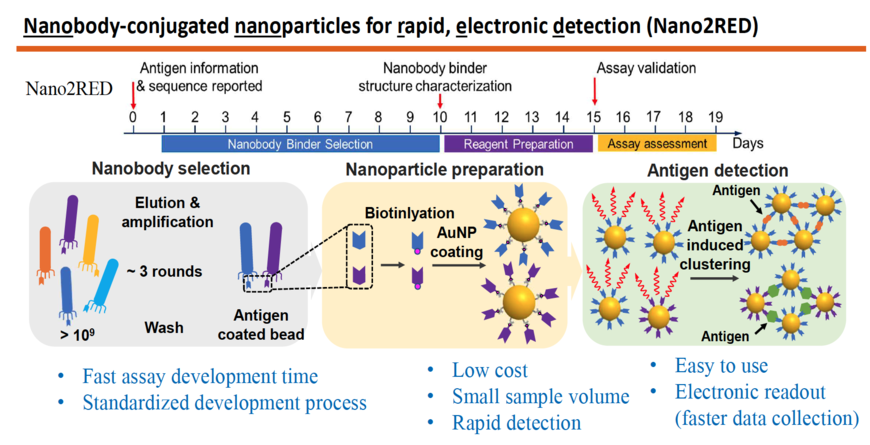 The top section illustrates the rapid timeline of steps for production of the test, which can all be carried out in roughly 20 days.The middle section of the graphic shows the basic steps involved. First, a large library of synthetic antibodies or nanobodies is produced and screened against a known antigen (left), next, nanobodies are attached to gold nanoparticles (middle) and finally, disease antigens are detected in a sample when gold nanoparticle-bound nanobodies fuse with them, producing a positive test result, (right).

Compared with widely used high-accuracy lab tests, such as ELISA, Nano2RED is much easier to use. It does not require surface incubation or washing, dye labelling, or amplification, yet still provides about 10 times better sensitivity than ELISA. In addition, the use of semiconductor devices supports a highly portable digital readout system, which can be developed and produced at a cost as low as a few dollars, making it ideal not only for lab use but for clinics, home use, and remote or resource-strained locations. This approach is based on modular designs, and could potentially be used to test for any pathogen.

“This technology works not because it is complex but because it is simple,” says professor Wang. “Another unique feature is the multidisciplinary nature of biosensing. A fundamental understanding of biochemistry, fluidics, and optoelectronics helped us come up with something this ‘simple’.”

Wang is a researcher with the Biodesign Center for Molecular Design and Biomimetics at ASU. He is also a researcher with ASU’s School of Electrical, Computer and Energy Engineering; and the Center for Photonic Innovation. Dr. Liangcai Gu is the collaborator at Department of Biochemistry and Institute for Protein Design at UW, Seattle.

The research appears in the current issue of the journal Biosensors and Bioelectronics. Dr. Xiahui Chen and Md Ashif Ikbal from ASU and Dr. Shoukai Kang from UW are the first authors, and Jiawei Zuo and Yuxin Pan are the other contributing authors.

Epidemiologists have long known the basic formula when confronting a disease outbreak. To identify cases and stop the contagion, it is necessary to develop an accurate test or assay that can identify the disease, then test early and often, to assess the rate of spread and attempt to isolate the infected.

Unfortunately, by the time a new diagnostic has been developed, manufactured, and distributed, the disease outbreak is often already widespread and challenging to contain. Further, accurate tests including PCR, (which can amplify tiny levels of pathogenic nucleic acids to measurable levels), are often expensive, labor-intensive and require sophisticated laboratory facilities.

The Ebola epidemic of 2014-2016, though largely confined to West Africa, spread with terrifying speed, causing panic and killing more than 11,000 people. The virus’ rate of lethality, one of the highest for any known pathogen, can exceed 90%, depending on disease strain. The crisis was exacerbated by a combination of inadequate surveillance systems and poor public health infrastructure.

SARS CoV-2, though less lethal than Ebola, has spread to every country on earth and has already killed more than 5.6 million people worldwide. In both disease outbreaks, diagnostic testing arrived late on the scene. Further, costly and cumbersome testing requirements have meant that far too few tests have been administered, even after their successful development.

The new study applies its innovative method to test for these two prominent diseases, as a proof of concept.

A common feature in many disease outbreaks is the lightning speed with which a pathogen, having first infected a handful of people, can gather momentum, fan out in all directions and quickly overwhelm hospitals and healthcare providers. Cutting off a pathogen’s routes of transmission requires identifying and isolating sick individuals through testing, as quickly as possible.

During a pandemic like COVID-19, the sensitivity of a given diagnostic test is secondary to how often the test is given and how long it takes for results to be processed. A highly sensitive test is of limited use if it can only be given once, and results require a weeks-long turnaround. Research has shown that infection outbreaks are best controlled when testing is repeated in less than 3-day intervals and at a large scale.

The basic idea of such diagnostics, known as immunoassays, is simple: a sample of blood (or other biological fluid) is applied to the assay, which is adorned with antibodies. When antibodies recognize the presence of a corresponding disease antigen in the sample, they bind with it, producing a positive test result. In the ELISA test, the disease antigen needs to be immobilized on a flat surface.

Nano2RED also relies on binding affinity for positive diagnosis but instead uses floating gold nanoparticles for readout. Unlike ELISA, Nano2RED can be developed from scratch in roughly 10 days and theoretically applicable for any pathogen, providing vitally important early surveillance in the case of a disease outbreak. It can deliver test results in 15-20 minutes and may be administered at an estimated cost of a penny per test. In the current study, the new test was shown to detect Ebola’s sGP in serum with a sensitivity roughly 10 times better than ELISA.

The accompanying graphic shows how the method works: The first step is to produce a very large library containing over a billion random amino acid sequences known as nanobodies, that can act as synthetic antibodies, able to bind with target disease antigens. This vast library of nanobodies is then successively screened against the antigen in question, for example sGP in the case of Ebola. Only those nanobodies that show strong binding affinity for the antigen are used for sensing.

The key innovation of Nano2RED is the way the antigen detection is registered. As disease antigens in the sample are recognized by the nanobodies, they bind together, forming clusters of bound nanobody and antigen, like islands of algae floating on the sea surface. “Basically, an antigen works like superglue to bring the nanoparticle together,” Wang says.

A “golden” opportunity in the fight against infectious disease

The gold nanoparticles provide a stable platform to hold the nanobodies in place.  Once enough binding has taken place, the bound clusters begin to sink to the bottom of the vessel. This can be detected with the naked eye in the form of a color change. The solution becomes lighter in color as the gold-nanoparticle-carried antigen-antibody clusters precipitate out, signaling detection of the pathogen.

While full precipitation of nanoparticle clusters leading to a test result can normally take several hours, the process can be sped up by centrifuging the sample, which eliminates the wait time for precipitation. In this case, just 15-20 minutes are sufficient for a result. “Of course, the gold nanoparticles are heavy, and that helps quick sedimentation, too.” Wang added.

Gold nanoparticles also work to display color, not yellow but red here, by absorbing light from a narrow spectral range. This absorbance feature allowed the Wang lab to invent  a tiny, inexpensive device that converts this color change into an electrical signal, using color-matching semiconductor LEDs and photodetectors. Such instruments produce a rapid and accurate readout of assay results, whose limits of detection are comparable to or better than costly lab-based spectroscopy methods.

The test also delivers quantitative results based on amount of antigen detected. This could be vitally useful for estimating disease severity as well as time elapsed since the infection event. In the future, the test results can be digitized by circuits and conveniently transmitted via internet to anywhere in the world for data analysis and further scrutiny, which could be important to government policy decision-making processes and timely interruption of the transmission.

Nano2RED requires only a tiny blood sample, typically around 20 microliters. “This also makes gold inexpensive in our case, because the mount we need is so tiny.” Wang said. Unlike conventional methods, Nano2RED is also very simple to use with minimal training involved for healthcare personnel. It does not require any time-consuming and expensive incubation, washing, fluorescent labeling or amplification.

Future research will help improve the assay’s limits of detection even further and modify its detection capacities to include virion particles, extracellular vesicles, small molecules, and nucleic acids. “There is certainly still a lot to explore” Wang added, “but we so far have a happy marriage between engineering disciplines and biology. And that is what we will continue to work on.”