A Nanoscale Look at Coronavirus Infection

A human cell being infected by a coronavirus is a crowded place as the virus turns its host into a virus-replicating machine. Now, for the first time, Stanford scientists have used super-resolution light microscopy to sift through the crowd and determine where in the cell viral molecules lie.

W.E. Moerner, professor of chemistry, and Stanley Qi, assistant professor of bioengineering and Institute Scholar at Stanford ChEM-H, have used the method, which gives scientists a nanoscale view into the cell, to pinpoint exactly where in the cell certain pieces of the coronavirus – like the spike protein and the genetic material – are at different points post-infection. They found that, unlike what lower-resolution confocal microscopy has indicated, the virus-replicating machinery and the RNA product of that process are physically separated in the cell, which could indicate new details about the viral life cycle.

Moerner, the Harry S. Mosher Professor in the School of Humanities and Sciences and professor, by courtesy, of applied physics, and Qi studied a coronavirus called HCoV-229E that, like its cousin SARS-CoV-2, is made up of a spike protein-studded envelope surrounding a strand of RNA, the virus’ genetic material. That single strand of genomic RNA, or gRNA, contains the instructions for making all the proteins that the virus needs, including those that make copies of the gRNA and those that assemble into the packaging that wraps around the RNA to make a new, intact virus.

“When infected, the cell turns itself into a zombie, completely mind controlled into producing more virus,” said Qi, who is also an assistant professor of chemical and systems biology. 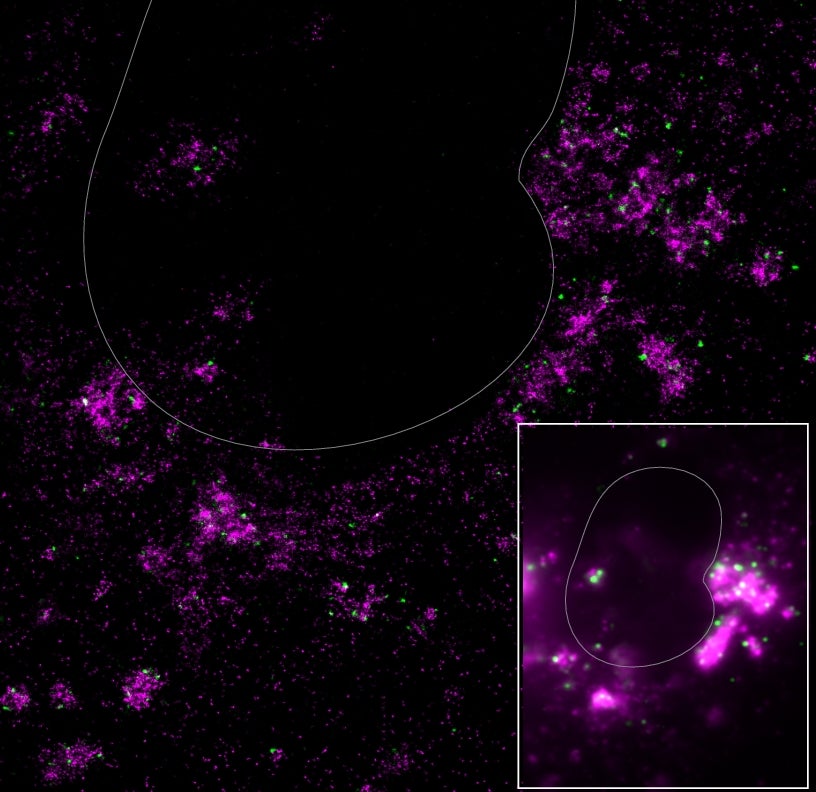 Comparison of confocal (inset) and super-resolution (full pane) images of a coronavirus-infected cell, with dsRNA labeled in green and gRNA labeled in magenta. The white clouds in the confocal image suggest the two forms of RNA might be found in the same place in the cell, while the super-resolution image shows that the dsDNA and gRNA never, in fact, overlap.

Scientists know a lot about which molecules are involved in which steps of viral life cycle. But precisely where in the cell all the virus’ molecules are during those steps has remained largely unanswered. Understanding these subtle details could give greater insight into precisely how the virus infects cells and help researchers find vulnerabilities or develop better treatments for infection.

In the study, which was published in Cell Reports Methods Feb. 28, the team zeroed in on two different forms of RNA: double-stranded RNA, or dsRNA, which is an intermediate along the way to making new copies of the virus, and gRNA, one strand of which gets injected into the cell, replicated and then packaged into new viruses. Knowing exactly where in the cell those pieces are could tell scientists not only where the virus-replicating steps (dsRNA) and virus-assembly steps (gRNA) are taking place, but how those steps are coordinated spatially.

Confocal fluorescence microscopy is a common method for seeing objects within a cell by recording light emitted from fluorescent labels or tags, not that different from the molecules that give rise to “day-glo” socks. But confocal microscopy can only be precise with structures that are about 250 nanometers (nm) across or larger. Coronavirus particles are much smaller, at about 120 nm in diameter, and the proteins and RNA within them even smaller. (For reference, a strand of hair is about 100,000 nm thick.)

“There is no getting around the fundamental blurriness of confocal microscopy,” said Moerner. “Many important cellular objects are very small; some 50 nm, some 10 nm, and some even smaller.”

Super-resolution fluorescence microscopy uses carefully controlled single-molecule imaging to bring these cellular objects into sharper focus, allowing scientists to see objects as small as 10 nm across. Scientists can only look at a single cell at a time using these techniques, and the experiments require lot of time and specialized resources. Despite the challenges, the unrivaled detail with which scientists can view the cell makes the process invaluable. And that jump in clarity revealed something unexpected to Moerner and Qi.

The research team used two differently colored tags to look at their two molecules, magenta for gRNA and green for dsRNA. In addition to spots of green and magenta, confocal images showed blurry white clouds that suggested that dsRNA and gRNA could be in the same spot throughout the cell, possibly enveloped together in some kind of particle. But by using super-resolution techniques, the team saw something very different.

“When I saw those images for the first time, it was like looking at some amazing galaxy,” said Moerner, who received the Nobel Prize in chemistry in 2014 for developing the microscopy techniques that give scientists these detailed views into the cell. The super-resolution images showed a dark sky of bright magenta clusters and green stars – and none of them ever overlapped. Contrary to what confocal images had hinted at, dsRNA and gRNA are never in the same place at the same time.

Separate experiments, in which they also looked at proteins from the virus and the host cell, confirmed that the virus-replicating dsRNA and the RNA product of that replication are never found floating through the cell together. Their results confirmed that viral replication occurs in a part of the cell known as the endoplasmic reticulum, or ER, as was already known. The gRNA formed then buds off into the cell to get packaged into a fully formed virus. Unlike what previous studies have shown, however, Moerner and Qi now saw that in addition to being found inside the ER, the virus-replicating dsRNA is also found in large (up to 450 nm) spheres that do not contain any gRNA throughout the cell. They suspect that these bubbles of dsRNA, which are not actively replicating, might be a sort of temporary dsRNA storage while new viruses are being packaged and shipped out.

Viral infection is a complex process, and while the team does not know exactly what drives the virus to produce these temporary stores of dsRNA, they hope that super resolution can also answer those questions and others in the future. By learning more about when and where certain viral infection steps take place, scientists may also be able to develop and evaluate treatments.

In this study, the researchers in the Moerner and Qi labs also joined forces to look at what happens after treatment with the antiviral remdesivir. They saw that the while the levels of gRNA and dsRNA overall decreased in the cell, the size of the dsRNA bubbles remained the same, which supports their temporary storage theory. The team hopes that further studies with the super-resolution toolkit could help determine if other antivirals might target those spheres. “When people don’t have tools, they have no way of making new findings,” said Qi.

“This is a great example of how you can’t predict what you will find until you go looking,” said Moerner. “Much can be learned about the biology of these complex systems with modern nanoscale optical tools.”