Biologists from ETH Zurich have discovered speargun-​like molecular injection systems in two types of bacteria and have described their structure for the first time. The special nanomachines are used by the microbes for the interaction between cells and could one day be useful as tools in biomedicine.

Many bacteria have sophisticated molecular injection devices that are used to do some amazing things. For example, a bacterium inoculates certain molecules into a worm larva via such a nanomachine composed of proteins, which triggers the transformation of the larva into an adult worm. Other bacteria use such molecular weapons to kill foreign strains of bacteria or insect larvae, or they defend themselves against scavenger cells.

The newly discovered injection nanomachine of cyanobacteria is located in an unusual place, namely in the thylakoid membrane (green).

Researchers in the group of Martin Pilhofer, Professor at the Institute of Molecular Biology and Biophysics at ETH Zurich, who specializes in such molecular injection machines, have just described two novel injection systems in the journal Nature Microbiology: one made by cyanobacteria, also known as blue-​green algae, and one by the marine bacterium Algoriphagus machipongonensis.

These CISs work like molecular syringes. When the outer sheath module of the nanomachine contracts, an internal, hidden tube filled with proteins is shot out. These proteins are either injected into the environment or directly into a target cell.

A surprising anchoring in the cell

One novel CIS, which the researchers found in cyanobacteria, was not anchored in the cell membrane or loosely floating inside the cell, as expected, but was attached to the so-​called thylakoid membrane, where photosynthesis takes place in these bacteria.

"That was the biggest surprise for us," says Gregor Weiss, lead author of the study on the cyanobacterial injection system. Despite this unusual localization, the CIS anchored in the thylakoid membrane – referred to as tCIS – fulfill their purpose. If cyanobacteria are stressed, for example by excessive salt concentrations in the water or ultraviolet light, the outer cell layers detach. This exposes the outward-​facing tCIS, ready to fire upon contact with potential target cells.

The molecular spear guns are also unexpectedly common, which according to Weiss indicates an important role in the life cycle of cyanobacteria. He suspects that the tCIS could play a role in the programmed cell death of individual cells in these multicellular cyanobacteria.

On the other hand, the ETH researchers Jingwei Xu and Charles Ericson, who also work in Pilhofer's group, discovered and describe a CIS produced by the marine bacterium Algoriphagus machipongonensis, which is not anchored in the cell at all, but is instead released into the environment to act on target cells in the area.

Among other things, the researchers used cryo-​electron microscopy to determine the structure of this specific subtype of ejected CIS (eCIS) in very high resolution, which no other working group had previously been able to do. "The newly discovered nano machines give us clues that contractile injection systems are more common than previously thought," says Ericson. 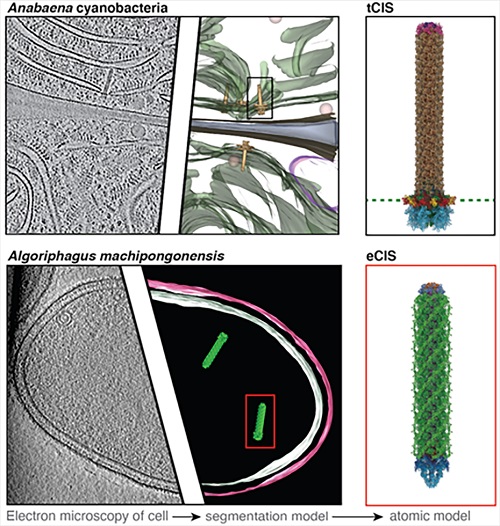 The two injection nanomachines of the cyanobacteria (top row) and the marine bacterium (bottom row) in comparison. The EM image on the left shows the localisation of the tCIS and the eCIS in the respective cell.

From molecules to whole bacteria

These studies are special because of their interdisciplinary, diverse approach: from bacteria collected in natural ecosystems to atomic-​level models of their respective CIS. "This work shows very nicely how different techniques can be used to get an idea of ​​how these systems and structures work," explains Weiss. In addition, the study shows that there is a need to move from laboratory strains to environmental samples in order to understand the role of injection systems in the life cycle.

Future use in biomedicine

With this in mind, it is conceivable that future researchers will use the modular structure in biomedicine by redesigning it so that a molecular speargun could target specific cell types and fire drugs or antimicrobials.