The research team developed a new technology combining nanogold and peptides that can restore both heart function and electrical conductivity.

Could a spritz of super-tiny particles of gold and peptides on a damaged heart potentially provide minimally invasive, on-the-spot repair?

Cutting-edge research led by University of Ottawa Faculty of Medicine Associate Professors Dr. Emilio Alarcon and Dr. Erik Suuronen suggests a spray-on technology using customized nanoparticles of one of the world’s most precious metals offers tremendous therapeutic potential and could eventually help save many lives. Cardiovascular diseases are the leading cause of death globally, claiming roughly 18 million lives each year.

In a paper recently published online in ACS Nanonorth_eastexternal link, a peer-reviewed journal that highlighted the new research on its supplementary cover, Dr. Alarcon and his team of fellow investigators suggest that this approach might one day be used in conjunction with coronary artery bypass surgeries. That’s the most common type of heart surgery. 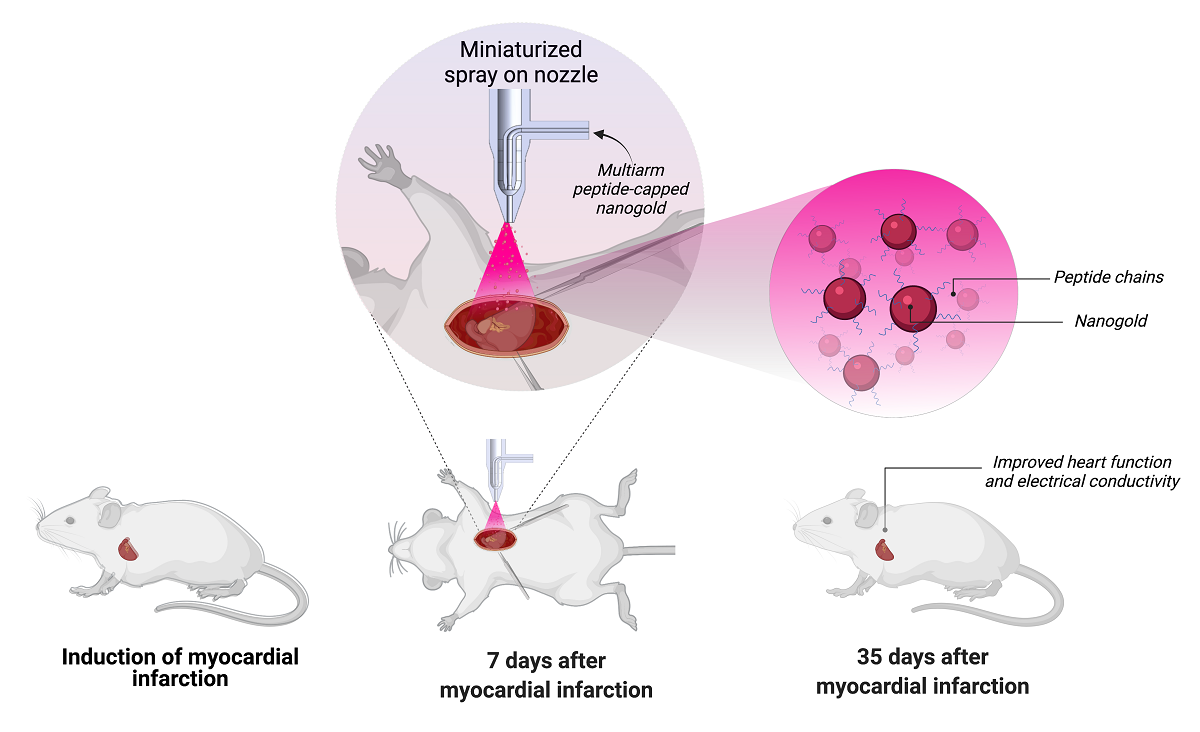 The therapy tested – which was sprayed on the hearts of lab mice – used very low concentrations of peptide-modified particles of gold created in the laboratory.

The therapy tested by the researchers – which was sprayed on the hearts of lab mice – used very low concentrations of peptide-modified particles of gold created in the laboratory. From the nozzle of a miniaturized spraying apparatus, the material can be evenly painted on the surface of a heart within a few seconds.

Gold nanoparticles have been shown to have some unusual properties and are highly chemically reactive. For years, researchers have been employing gold nanoparticles – so tiny they are undetectable by the human eye – in such a wide range of technologies that it’s become an area of intense research interest.

In this case, the custom-made nanogold modified with peptides—a short chain of amino acids —was sprayed on the hearts of lab mice. The research found that the spray-on therapy not only resulted in an increase in cardiac function and heart electrical conductivity but that there was no off-target organ infiltration by the tiny gold particles.

Dr. Alarcon says that not only does the data suggest that the therapeutic action of the spray-on nanotherapeutic is highly effective, but its application is far simpler than other regenerative approaches for treating an infarcted heart.

At first, the observed improvement of cardiac function and electrical signal propagation in the hearts of tested mice was hard for the team to believe. But repeated experiments delivered the same positive results, according to Dr. Alarcon, who is part of the Faculty of Medicine’s Department of Biochemistry, Microbiology and Immunology and Director of the Bio-nanomaterials Chemistry and Engineering Laboratory at the University of Ottawa Heart Institute.

To validate the exciting findings in mice, the team is now seeking to adapt this technology to minimally invasive procedures that will expedite testing in large animal models, such as rabbits and pigs.

Dr. Alarcon praised the research culture at uOttawa and the Heart Institute, saying that the freedom to explore is paramount. “When you have an environment where you are allowed to make mistakes and criticize, that really drives discoveries,” he says.

The team involved in the paper includes researchers from uOttawa and the University of Talca in Chile. Part of the work was funded by the Canadian government’s New Frontiers in Research Fund, which was launched in 2018 and supports transformative high risk/high reward research led by Canadian researchers working with local and international partners.

Read the original article on University of Ottawa.