Carbon nanotubes that are prone to tangle like spaghetti can use a little special sauce to realize their full potential.

Rice University scientists have come up with just the sauce, an acid-based solvent that simplifies carbon nanotube processing in a way that’s easier to scale up for industrial applications.

The Rice lab of Matteo Pasquali reported in Science Advances on its discovery of a unique combination of acids that helps separate nanotubes in a solution and turn them into films, fibers or other materials with excellent electrical and mechanical properties. 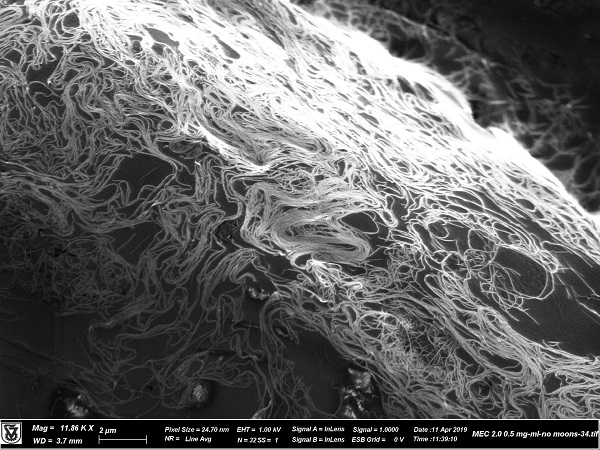 A spaghettilike tangle of carbon nanotubes seen in a microscope image will no longer be an issue when processed with a solvent developed at Rice University. The solvent will enable applications for carbon nanotubes that go beyond the production of conductive fibers, including 3D and roll-to-roll printing.

The study co-led by graduate alumnus Robert Headrick and graduate student Steven Williams reports the solvent is compatible with conventional manufacturing processes. That should help it find a place in the production of advanced materials for many applications.

“There’s a growing realization that it’s probably not a good idea to increase the mining of copper and aluminum and nickel,” said Pasquali, Rice’s A.J. Hartsook Professor and a professor of chemical and biomolecular engineering, chemistry and materials science and nanoengineering. He is also director of the Rice-based Carbon Hub, which promotes the development of advanced carbon materials to benefit the environment.

“But there is this giant opportunity to use hydrocarbons as our ore,” he said. “In that light, we need to broaden as much as possible the range in which we can use carbon materials, especially where it can displace metals with a product that can be manufactured sustainably from a feedstock like hydrocarbons.” Pasquali noted these manufacturing processes produce clean hydrogen as well.

“Carbon is plentiful, we control the supply chains and we know how to get it out in an environmentally responsible way,” he said.

A better way to process carbon will help. The solvent is based on methanesulfonic (MSA), p-toluenesulfonic (pToS) and oleum acids that, when combined, are less corrosive than those currently used to process nanotubes in a solution. Separating nanotubes (which researchers refer to as dissolving) is a necessary step before they can be extruded through a needle or other device where shear forces help turn them into familiar fibers or sheets.

Oleum and chlorosulfonic acids have long been used to dissolve nanotubes without modifying their structures, but both are highly corrosive. By combining oleum with two weaker acids, the team developed a broadly applicable process that enables new manufacturing for nanotubes products. 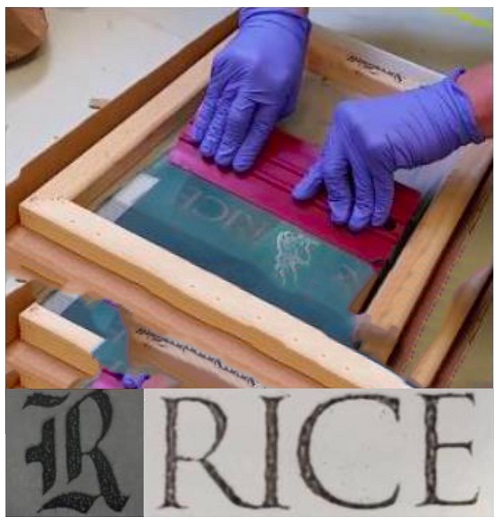 A Rice University lab developed a solvent that enables new applications for carbon nanotubes. Here, a nanotube ink made with the process is used in traditional silk screen printing.

“The oleum surrounds each individual nanotube and gives it a very localized positive charge,” said Headrick, now a research scientist at Shell. “That charge makes them repel each other.”

After detangling, the milder acids further separate the nanotubes. They found MSA is best for fiber spinning and roll-to-roll film production, while pToS, a solid that melts at 40 degrees Celsius (104 degrees Fahrenheit), is particularly useful for 3D printing applications because it allows nanotube solutions to be processed at a moderate temperature and then solidified by cooling.

The researchers used these stable liquid crystalline solutions to make things in both modern and traditional ways, 3D printing carbon nanotube aerogels and silk screen printing patterns onto a variety of surfaces, including glass.

The solutions also enabled roll-to-roll production of transparent films that can be used as electrodes. “Honestly, it was a little surprising how well that worked,” Headrick said. “It came out pretty flawless on the very first try.”

The researchers noted oleum still requires careful handling, but once diluted with the other acids, the solution is much less aggressive to other materials.

“The acids we’re using are so much gentler that you can use them with common plastics,” Headrick said. “That opens the door to a lot of materials processing and printing techniques that are already in place in manufacturing facilities.

“It’s also really important for integrating carbon nanotubes into other devices, depositing them as one step in a device-manufacturing process,” he said.

They reported the less-corrosive solutions did not give off harmful fumes and were easier to clean up after production. MSA and pToS can also be recycled after processing nanotubes, lowering their environmental impact and energy and processing costs.

Williams said the next step is to fine-tune the solvent for applications, and to determine how factors like chirality and size affect nanotube processing. “It’s really important that we have high-quality, clean, large diameter tubes,” he said.