A newly designed “smart pillow” that tracks the position of the head during sleep could help to track and monitor sleep quality and duration in those with sleep disorders.

The human body needs sleep as much as it needs food and water. Yet many people fail to get enough, causing both mind and body to suffer. People who struggle for shut-eye could benefit from monitoring their sleep, but they have limited options for doing so. In a new study in ACS Applied Materials & Interfaces, one team describes a potential solution: a self-powering smart pillow that tracks the position of the head. 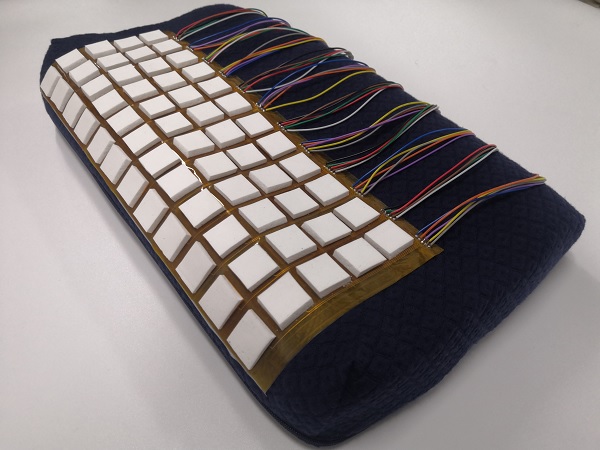 This self-powering smart pillow can track the position and motion of the head during sleep.

Studies have linked chronic lack of sleep to physical ailments, such as diabetes and heart disease, as well as mental health issues. Those interested in getting a better handle on what’s happening to them at night have two primary options. They can take a sleep test conducted in a medical facility, or they can use an app through a smartphone or smart watch — a much more convenient, but less accurate choice. Recognizing the need, many groups have begun developing new sleep monitoring systems using triboelectric nanogenerators (TENGs). These self-powering systems have taken the form of eye masks, belts, patches and even bed sheets. Ding Li, Zhong Lin Wang and their colleagues wanted to adapt this approach to create a less restrictive, more comfortable version that focuses on the movement of the head during sleep.

To construct this new smart pillow, the researchers formulated a flexible, porous polymer  triboelectric layer. Movement between the head and this layer changes the electric field around nearby electrodes, generating a current. They strung together several of these self-powering sensors to create a flexible and breathable TENG (FB-TENG) array that can be placed atop an ordinary pillow. This system could generate voltage that corresponded to the amount of applied pressure, and it could track the movement of a finger tracing out letters. The FB-TENG also could capture the pressure distribution of a fake human head as it shifted position. This smart pillow could have uses beyond tracking sleep, the researchers say. For example, the system could monitor patients with diseases that affect the movement of the head, such as the degenerative neck disorder cervical spondylosis. What’s more, the smart pillow could be adapted to offer an early warning system for those at risk of falling out of bed, they say.