UdeM chemistry professor Alexis Vallée-Bélisle and his team have received $500,000 to develop a rapid test for detecting drugs in saliva and blood.

Alexis Vallée-Bélisle, professor in the Department of Chemistry and Canada Research Chair in Bioengineering and Bio-nanotechnology, specializes in developing DNA-based medical technologies. Recently he was awarded a grant under a special program set up by the Quebec Ministry of Economy and Innovation and Axelys, a non-profit that accelerates the development and transfer of high-potential innovations stemming from public research. The funds will be used to help launch his rapid drug detection device on the path to commercialization. Anasens, a start-up he co-founded, is also a partner in the project.

We caught up with Vallée-Bélisle to learn more about his invention. 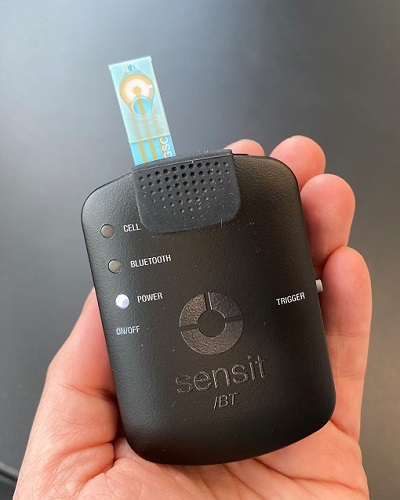 Drug detector allowing to carry out a rapid test from saliva or blood.

What is this technology that are you developing in partnership with Axelys and Anasens?

My research team is currently working on a DNA-based biosensor for detecting drugs in saliva and blood. We’re talking about legal drugs, like cannabis, but also illicit drugs like opioids, amphetamines and methamphetamines. This biosensor can detect and quantify the amount of these drugs in about two minutes.

Who is the intended user?

This drug detection device is intended for anyone who requires information on drug consumption for safety and wellness reasons—for example, police officers who have to test a driver suspected of being drug-impaired, emergency room doctors who need to know the level of a drug in a patient’s blood right away, and even individuals who want to monitor their own drug consumption at home. At first it will be used in health and public safety settings, but we eventually want to make it available to a broader public.

How does the device work?

Our inspiration was the glucometer, a simple and inexpensive device that diabetics use to monitor their blood sugar levels. We have adapted this device, most notably by adding a DNA-based method of detection.

What is the advantage of your device over existing ones?

The big advantage is ease of use—our device is fast, portable and digital. It digitizes the electrical signal produced when the drug is detected and gives a reading much faster than other devices currently available on the market.

These other devices are more like rapid COVID-19 tests. They involve several steps and you have to wait 10 to 12 minutes to see a positive or negative result, which is not quantitative. By contrast, our device gives a numerical reading in about two minutes that is automatically sent to a tablet or smart phone. This technology really simplifies the process for users.

It seems like the technology is already perfected, so what will you use this grant for?

We know the science behind our technology is sound because we have demonstrated that it works well in the lab, but the grant will enable us to create a prototype that we can test in the real world. Traditional research grants don’t cover this step, which is why this new funding program created by the Quebec government and Axelys is so important. It helps discoveries make it out of the university lab and into the real world, where they can benefit society by improving our daily lives and the health of people around the world.