Synthetic biology strives to achieve robust control of biological processes in order to create designer organisms for a variety of industrial, diagnostic, and therapeutic applications.

Researchers at the iNANO center of Aarhus University have developed RNA origami sponges and CRISPR-based regulators for advanced genetic control of enzymatic pathways in microorganisms to create a cheaper and more sustainable production of valuable biochemicals.

Developing tools for precise control of biological processes has been one of the main pillars of the now mature field of synthetic biology. These scientific tools borrow principles from a multitude of research fields which when combined enable unique applications that are potentially transformative for the modern society. Translating modern RNA nanotechnology innovations in the biological context possesses immense potential due to compatibility with folding and expression in cells, but also imposes unique challenges such as tight performance conditions and inherent instability of RNA molecules. 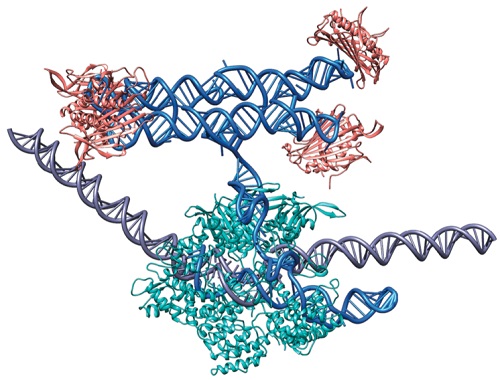 However, a recent structural RNA design approach developed in the Andersen lab, termed ‘RNA origami’, is trying to tackle this. This approach attempts to generate complex man-made RNA-based devices that are stable in cells, interact with other biomolecules, including other RNA and proteins, and enable unique applications, particularly in the context of gene regulation. Demonstrated by two distinct approaches recently published, RNA origami is presented as a sophisticated RNA design platform that when applied in the cellular context, generates unique molecules for synthetic biology-based regulation. 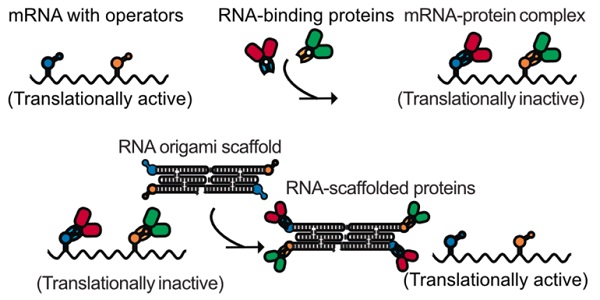 An mRNA with operators is inhibited by the proteins they express. RNA origami molecules serve as sponges that bind the proteins and make the mRNAs translationally active again.

In the first approach, the RNA origami was used to achieve precise control of protein production levels when expressed in bacteria. Self-inhibiting protein expression cassettes were made by installing a strong binding site for the expressed protein in its own gene. Afterwards, RNA origami decorated with the same protein-binding sites was expressed in large excess. In this way, the RNA origami serves as a protein-sponge that sequesters proteins in the cell and allows expression of the self-inhibited protein. This general concept was shown to enable regulation of several proteins simultaneously and turn on enzymatic pathways for improved product yields. 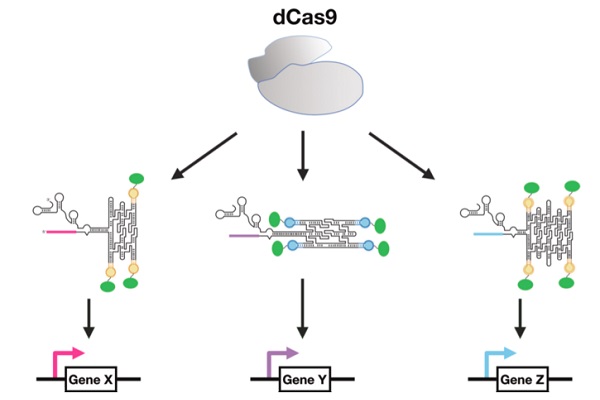 CRISPR-dCas9 functions as a master regulator of sgRNA – RNA origami fusion molecules that bring transcription factors to a promoter sequence.

In the second approach, RNA origami was combined with CRISPR, one of the most popular modern molecular biology techniques, to regulate gene expression in yeast. The RNA origamis were integrated in the small RNAs that guide CRISPR-Cas9 to target specific sequences in the DNA genome. The RNA origami scaffolds were decorated with protein-binding sites capable of recruiting transcription factors. By targeting the RNA scaffolds to promoter regions, the transcription factors activated gene expression. It was shown that the expression strength can be tuned by the orientation of the scaffold and the amount of transcription factors recruited. Finally, it was demonstrated that multi-enzyme pathways could be controlled for high-yield production of the anti-cancer drug violacein.

Those discoveries are important, as it shows that, with the help of RNA origami, microorganisms can be used as small factories for cheaper and sustainable production of biochemicals, like e.g. medicine.