Controlling the rotation of this molecule could lead to new technologies for microelectronics, quantum computing and more.

You can easily rotate a baseball in your hand by twisting your fingers. But you need inventive scientists with access to world-class scientific facilities to rotate an object that is only two billionths of a meter wide. That is a million times smaller than a raindrop.

Scientists at the U.S. Department of Energy’s (DOE) Argonne National Laboratory report they can precisely rotate a single molecule that small on demand. The key ingredient is a single atom of europium, a rare earth element. It rests at the center of a complex of different atoms and gives the molecule many potential applications.

“We are able to rotate this europium complex by 60 or 120 degrees to the right or left,” said Saw Wai Hla, physicist at the Center for Nanoscale Materials (CNM), a DOE Office of Science user facility at Argonne, and a physics professor at Ohio University. ​“The ability to control the motion of a rare earth complex such as this could impact a wide spectrum of technologies.” That includes next generation microelectronics, quantum technologies, catalysis to speed up reactions, conversion of light into electricity and more.

The term ​“rare earth” is deceptive. The rare earth elements are not exactly rare but are critical materials used in many electronic devices, such as cellular phones, computer hard drives, solar panels and flat screen monitors. The capability to rotate this europium molecule on demand could expand their applications into next generation microelectronics that run with relatively low power, quantum computers and more. 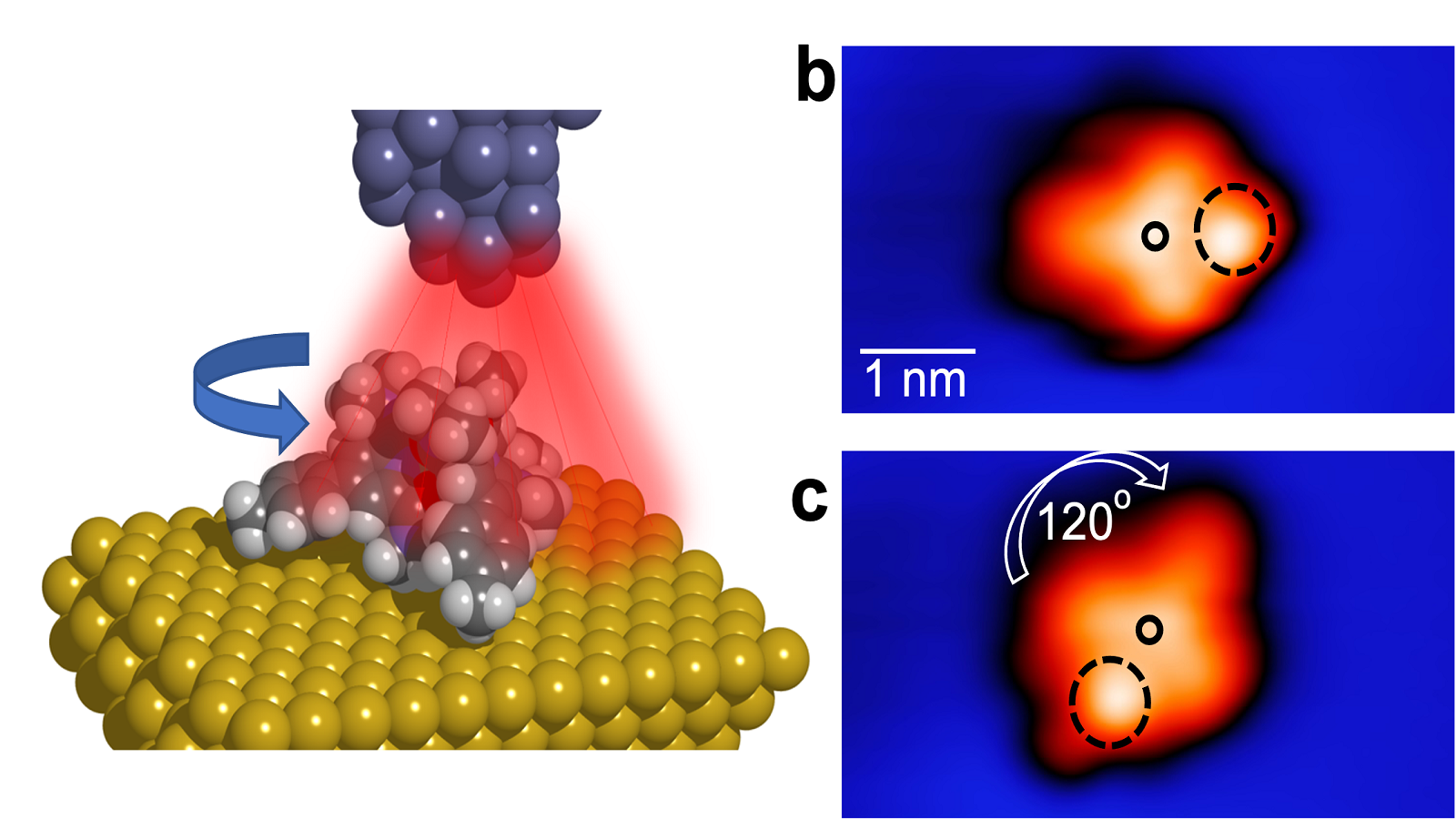 Rare earths readily combine with other elements in the Earth’s crust. It is thus difficult and costly to produce pure rare earths for devices. It is also expensive to harvest them from rare-earth containing waste. The team’s europium complex would reduce the amount of rare earth needed for a particular device and would be much less expensive to manufacture in mass quantities.

Because opposites attract, these negative and positive charges keep these components together without the need for a chemical bond. And the small molecule at the bottom anchors the complex to a sheet of gold. This sheet acts like a table to hold the whole complex in one place, just as you need a flat solid surface to spin a bottle.

“Normally, if you attach a complex like ours with positive and negative charges to a metal sheet, the charges dissipate,” Hla said. ​“So, we were thrilled when that did not happen here. Our calculations indicated that the atoms in the complex surrounding the europium atom act as an insulator that prevents the charges from dissipating to the gold sheet.”

The two negatively charged molecules in the complex work together to act as a control unit. To spark the rotation, the team applied electrical energy to a specific point on the complex through the tip of an instrument called a scanning tunneling microscope. This probe not only controls the rotation but also can visualize the complex for study.

At a temperature of 100 Kelvin (minus 208 Fahrenheit), the team’s complex rotates constantly. That rotation stops when they decrease the temperature to an ultracold 5 K. Applying the electric energy starts the desired rotation of 60 or 120 degrees, clockwise or counterclockwise depending on where the electric field is directed.

“Developing, fabricating and testing this nanoscale complex would not have been possible without the one-of-a-kind instruments in CNM,” Hla said.

What’s more, a beamline (XTIP) in the Advanced Photon Source, a DOE Office of Science user facility at Argonne, provided the high-brilliance X-ray beam needed to establish that the single europium atom had a positive charge. ​“XTIP is the world’s first beamline dedicated to the technique of synchrotron X-ray scanning tunneling microscopy,” said Volker Rose, an Argonne physicist with a joint appointment at Ohio University.

“With the XTIP beamline we were able to characterize the elemental and chemical states of the europium-containing molecule,” said assistant physicist Nozomi Shirato. These data established that the single europium atom in the molecule has a positive charge of plus three and does not lose that charge when absorbed on the gold surface. This retention of the charge state is key to the ability to rotate the molecule.

“Our primary mission is to understand at the level of atoms the properties of rare earths, which are critical materials to U.S. industry,” added Hla. ​“This particular project could beneficially impact many different technologies that exist now or could be developed.”

This research was published in Nature Communications.