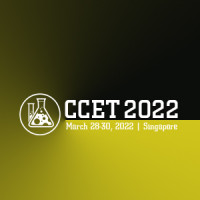 CCET 2022 expects a global audience of delegates, including eminent speakers, academicians, researchers, students, and medical and industry professionals, to convene on a global forum to discuss their latest research ideas and technical developments in the fields of Catalysis and Chemical Engineering. The conference will be organized around the theme “Neoteric Advancements Fostering Chemical Engineering and Catalysis.”

The event unites interdisciplinary community of renowned experts and young researchers from the fields of chemistry, green chemistry, chemical engineering, nanotechnology and materials science to address and explore fundamental aspects of catalysts, which are responsible for the manufacture and processing of a broad range of daily use products and pose grand challenges for mankind.

CCET 2022 provides a global forum to showcase your research ideas and innovations and to meet different competences and establish contacts focused to develop new research collaborations. It will provide a highly interactive platform for relevant experts from the academic and industrial areas to exchange education and research face to face.